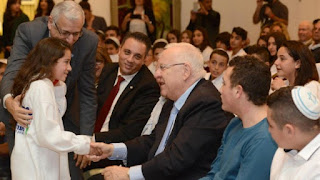 President Reuven Rivlin on Monday hosted 58 children whose lives have been bit by terrorism to celebrate their bar mitzvahs and bat mitzvahs at the President’s Residence in Jerusalem.

The event, which included a full day of activities for the 13-year-old boys and 12-year-old girls, was organized by the Association of Victims of Terrorism charity, and was attended by Minister of Social Affairs and Social Services Haim Katz.

Referring to the ongoing wave of almost-daily Palestinian terror attacks — which has continued for some three months — Rivlin spoke of the cost in life that terror exacts from the Jewish state.

“Young children have once again become orphans because of the murderous actions of our enemies,” he said. “We pay a price for our devotion to this country, and we pay a price for our being Jews. It is a painful and hard price to pay — a price that each and every one of you knows personally, but we also have much pride, strength and energy.” 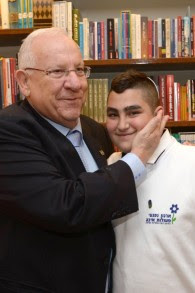 Representing the children was Naor Shalev Ben-Ezra, who nearly died after being knifed in an attack. Ben-Ezra was riding his bike in Jerusalem’s Pisgat Ze’ev neighborhood on October 12 when he was stabbed by 13-year-old Ahmed Manasra and his cousin Hassan, 15.

“To this very moment, the thoughts of what I went through do not leave me,” he said. “I cannot let go of the thought that I may have not woken up from this injury, have had my life ended through no fault of my own — all because of my attacker, a boy my age, educated on hate and resentment of the Jewish people, who hurt me just because I’m a Jew.”

Ben-Ezra’s attackers also stabbed a 25-year-old man, who was hospitalized in serious condition. Police fatally shot Hassan and a passing car ran over Ahmed, who recovered in an Israeli hospital, remains in custody and is facing murder charges.

Ben-Ezra was rushed to the hospital after the attack in critical condition, and surgeons performed life-saving surgery. During his time in hospital, Ben-Ezra spent a week in an induced coma hooked up to a breathing machine. Last week, he held another bar mitzah celebration at the Western Wall in the Old City of Jerusalem.

“We all closely and anxiously followed Naor’s situation,” Rivlin said, adding, “we prayed for Naor’s well-being and recovery. Today, against all odds, Naor is with us, celebrating his bar mitzvah. Naor — we are so excited to celebrate with you. Your celebration — like the celebrations of all of you — symbolizes the triumph of joy over pain and the victory of life.”