2 smoke grenades thrown into home near Ramallah where a couple and their 9-month-old baby boy were sleeping; family unharmed 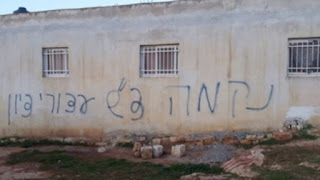 Graffiti sprayed on the wall of a home in the West Bank town of Beitillu, December 22, 2015. The slogan reads 'Revenge greeting Prisoners of Zion.' (Israel Police)

MORE ON THIS STORY

A Palestinian family was attacked with smoke grenades early Tuesday morning in their West Bank home in what police are investigating as a suspected Jewish extremist attack.

The attackers broke a window of a house in Beitillu near Ramallah, in which a couple and their 9-month-old baby boy were sleeping, and threw in the grenades. There were no injuries in the attack.

The words “Revenge” and “Greetings, prisoners of Zion” were found sprayed on the wall of an adjacent building, an apparent reference to Jewish suspects being held in connection with a deadly arson attack six months ago in the Palestinian village of Duma.

In an interview with Army Radio, Husain al Najjar, the father, said the attack woke his family in the early hours of the morning. 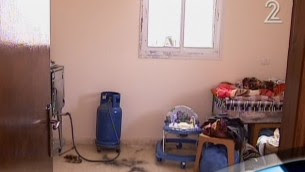 The damage to the al Najjar family home in the West Bank, after suspected Jewish terrorists hurled two smoke grenades through the window as they were sleeping, December 22, 2015 (screen capture: Channel 2)

“Settlers came at 1:30 at night and wrote on the wall outside and broke the glass [window],” he said. “The house is still full of gas. The neighbors came and helped get us out of house. Thank God nothing serious happened.”

He claimed that the house was attacked by settlers a year ago as well, and that his neighbors have also suffered multiple attacks.

“I just want to live in quiet — for me and all people,” al Najjar said.

Security forces and officials from the Civil Administration, which governs Palestinians in Israeli-controlled areas of the West Bank, arrived at the scene along with police, who opened an investigation into the attack as a suspected “nationalistic crime.”

The attack in Duma on July 31 killed three members of a Palestinian family. Only one member of the Dawabsha family — four-year-old Ahmed — survived the attack, and remains hospitalized in Israel. The 18-month-old baby Ali was killed on the night of the attack, while parents Riham and Sa’ad succumbed to their injuries in the succeeding weeks. 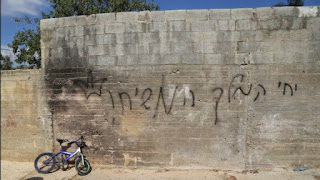 Graffiti outside the Dawabsha home in Duma that reads “Long live the Messiah king.” (Eric Cortellessa/Times of Israel)

An unspecified number of Jewish suspects have been arrested in connection with the attack, which is being investigated as an act of terrorism, and prosecutors say they are preparing to indict them. Details of the investigation, and the identity of the suspects, have been withheld from publication by a court-imposed gag order. 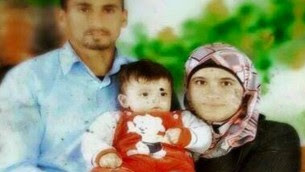 Saad and Riham Dawabsha, with baby Ali. All three died when the Dawabsha home in the West Bank village of Duma was firebombed, by suspected Jewish extremists, on July 31, 2015 (Channel 2 screenshot)

Last week, the suspects’ attorneys, who at the time had been allowed to meet with all but one suspect after two weeks of being denied access their clients — and only after appeals to the High Court — alleged that the detainees were tortured during their interrogations.

In response to the accusations, Shin Bet officials said over the weekend that the agency’s actions were within the bounds of the legal mandate given to it by the cabinet.

The conditions of the suspects’ detention, including the denial of legal counsel for more than two weeks, were brought before the High Court of Justice last week and were approved, they noted.

On Monday, Prime Minister Benjamin Netanyahu rejected allegations that the Jewish suspects had been tortured, telling Knesset members all Shin Bet investigations were being conducted “in accordance with the law.” 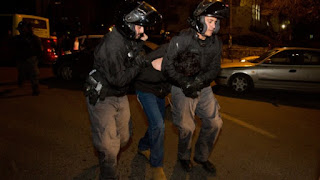 Israeli security forces detaining a right-wing activist during a protest in Jerusalem on December 20, 2015, against the ongoing detention of Jewish youths in connection with the murder in July of three members of the Palestinian Dawabsha family. (Yonatan Sindel/Flash90)

On Monday, dozens of right-wing protesters attempted to block a highway leading into Jerusalem, but were prevented from doing so by law enforcement officers, a police spokesperson said.

Violence broke out on Sunday night during a similar, but larger demonstration by right-wing activists in the same area, under Jerusalem’s Chords Bridge, to protest the ongoing incarceration of suspects in the case. 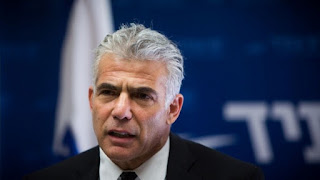 Opposition Knesset member Yair Lapid said Thursday that Jewish terrorism is a much larger problem than previously thought and that the incitement behind it has political support in Israel.

In a letter to the head of the Shin Bet security service, Yoram Cohan, and Israel Police chief Roni Alsheich, Lapid, who leads the Yesh Atid party, called for more efforts to defeat the problem, the Hebrew-language Ynet news site reported on Thursday.

“The known and unpublished material that has been revealed in recent weeks suggests that the circles of violence and incitement of Jewish terror can no longer be attributed to just a few dozen ‘isolated’ youths living in specific settlement places,” he wrote. “Surrounding these young people are wider circles of support — ideological, political, and likely also operational.

“It is clear today that it is impossible to deal with Jewish terror without broader police and Shin Bet treatment of the incitement that leads to it,” he continued, while noting that security forces are “stretched to the limit of their ability after the 100 days of the ‘knifing intifada'” — a reference to the recent three months of near-daily Palestinian attacks, mostly stabbings.

Speaking of the Jewish extremists, he noted that “we are no longer talking about an insignificant phenomenon, but a direct threat to Israeli sovereignty.

“It is time for the sovereign to act like a sovereign — firmly, with strength, on a wide scale and without hesitation. You should act against these phenomena with the full operational ability of your organizations.”

Lapid’s letter came amid uproar over a video showing far-right wing Israeli extremists at a wedding dancing in celebration of the murder of Palestinians.

The video, aired by Channel 10 on Wednesday, drew widespread condemnation, though some right-wing lawmakers accused security officials of leaking the video to justify the rough treatment of Jewish extremists being interrogated over the killing of three members of a Palestinian family in July.

The clip shows dozens of young Israeli right-wing extremists, said to be linked to the suspected Jewish perpetrators of the Dawabsha family murder, celebrating the killing at a Jerusalem wedding three weeks ago.

Revelers in the video are seen waving knives, rifles, pistols and a Molotov cocktail. Amid the festivities, a photo of baby Ali Dawabsha, who was burned to death along with his parents in the July 31 firebombing in the West Bank village of Duma, is shown being repeatedly stabbed.

Police said they were opening an investigation into the video, which drew the ire of both opposition leader Isaac Herzog and Prime Minister Benjamin Netanyahu, who condemned the images and the elements behind them. Netanyahu called the video “shocking,” while Herzog termed the revelers “lowlifes.”

During an interview with Ynet on Thursday, Lapid urged more law enforcement against Jewish terror and the culture that promotes it, which he said can no longer be dismissed as the realm of a marginal, insignificant, and isolated group.

“We need to start to act against the incitement, against the background from which it grows, to make arrests, to investigate, to broaden the quality of intelligence,” he said. “For a long time there was a frame of mind that it is just a very small isolated group, and we now see that that isn’t the case. It didn’t grow in an empty space.”

“We need to investigate the incitement, to apply the law to prevent incitement — and if the law needs to be change then we will help.

“The law for Jewish terror is the same as the law for Arab terror. And they both threaten Israeli sovereignty.”