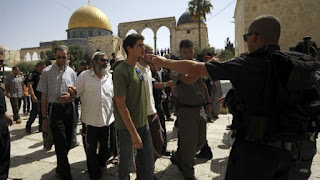 This Thursday, July 28, 2015 photo shows a group of religious Jews escorted by Israeli police at the Temple Mount in Jerusalem. (AP/Mahmoud Illean)

The United Nations Educational, Scientific, and Cultural Organization passed a resolution Wednesday condemning ongoing Israeli archaeological excavations near the Temple Mount and elsewhere in Jerusalem’s Old City. The resolution proposal had originally sought to name the Western Wall a Muslim religious site, but Arab states struck that demand from the draft earlier in the day.

It also condemned the “aggression and illegal measures taken against the freedom of worship and access of Muslims to Al-Aqsa Mosque and Israel’s attempts to break the status quo since 1967.”

Twenty-six UNESCO representatives voted in favor of the resolution, six voted against, and twenty-five abstained. The United States, Britain, Germany, the Netherlands, the Czech Republic and Estonia opposed the resolution.

The resolution also recognized Rachel’s Tomb in Bethlehem and the Tomb of the Patriarchs in Hebron as Muslim sites.

The vote came hours after the Arab states withdrew their demand that UNESCO declare the Western Wall an “integral part” of the Al-Aqsa Mosque compound on Jerusalem’s Temple Mount.

In an effort to garner support for the motion, some of the most incendiary language was removed or exchanged for less provocative terms.

All references to Jerusalem as “the occupied capital of Palestine” were withdrawn from the draft, as was a call for the international community to condemn Israel for urging “civilians to carry weapons whenever they leave their homes.”

Palestinians allege that a wave of Palestinian attacks in recent weeks against Israeli civilians and security personnel stems from Israel’s attempts to change the arrangements at the Temple Mount, where Jews are allowed to visit but not pray. Israel has repeatedly denied the allegations.

The UK voted against the new resolution, despite the Palestinians’ removal of the most controversial segment. “The language is unacceptable, and we don’t think it’s helpful to bring in a provocative motion at times of tensions,” a British official said. “We regret that there wasn’t more time to discuss the motion.”

On Tuesday, the head of UNESCO said she “deplored” the proposal. The move, Irina Bokova warned on the agency’s website, “could be seen to alter the status of the Old City of Jerusalem and its Walls and incite further tensions.”

The executive board had been scheduled to vote Tuesday on the resolution, but Bokova postponed the vote until Wednesday.

In a statement, Bokova called on the UNESCO board “to take decisions that do not further inflame tensions on the ground and that encourage respect for the sanctity of the Holy Sites.”

Speaking alongside UN Secretary General Ban Ki-moon, who visited Israel on Tuesday in a bid to pursue solutions to the resurgent violence, President Reuven Rivlin said efforts to inflame tensions must be rejected.

“The United Nations and all its institutions have a responsibility to work against any escalation of the conflict. UNESCO must reject any attempt to deny the Jewish connection to the Temple Mount,” he said.

The Western Wall is at the base of Jerusalem’s most sensitive holy site. The hilltop compound is revered by Jews as the Temple Mount, the site of the two biblical Jewish temples. Today, it’s home to the Al-Aqsa Mosque, Islam’s third-holiest shrine and a key national symbol for the Palestinians.