The radio interview is in English and these absurd lies can be heard at the 30 second mark here. He also says Israel "demolished" 50,000 homes (according to anti-Israel site Electronic Intifada, 15,670 homes were damaged, not demolished,) and that 500,000 Gazans are homeless (that is the maximum number displaced during the war but only about 50,000 remain in shelters as of a few weeks ago.) 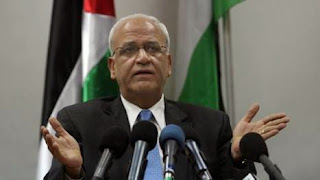 Escalating the Palestinian leadership’s rhetorical assault on Israel, the chief Palestinian Authority negotiator, Saeb Erekat, on Monday claimed that 96 percent of Gazans killed in the summer’s Israel-Hamas conflict were civilians, reiterated PA President Mahmoud Abbas’s charge of Israeli “genocide,” and accused Israel of seeking to impose apartheid on the Palestinians.

In an Army Radio interview conducted in English, Erekat also claimed that Israel killed 12,000 people and injured another 12,000 in Gaza, though it was possible that he misspoke and intended to say 2,000 fatalities — the widely accepted figure.

Responding to Erekat’s interview, Israel’s Communication Minister Gilad Erdan said the Palestinian leadership was operating “an industry of lies” aimed at fundamentally delegitimizing Israel, and that there was “no one to talk to” about peace on the Palestinian side.

Erekat, in the radio interview, defined genocide as “a direct attempt to eliminate, horrify, relocate, destroy a way of life” and claimed “Israel committed the killing of 12,000 and wounding 12,000 Palestinians; 96 percent of them are civilians.”

UN figures put the death toll in Gaza of the 50-day Israel-Hamas conflict at some 2,100, almost three-quarters of them civilians. Israel disputes these findings, and says about 1,000 of the dead were Hamas and other gunmen. It blames Hamas for all civilian casualties, since the Islamist terror group emplaced its war machine amid the civilian populace. Seventy-two Israelis — six of them civilians — were killed in the conflict, during which Hamas and other Gaza terror groups fired some 4,600 rockets and other projectiles at Israel.

“I know Israelis are provoked for the fact that someone is using the term genocide,” Erekat said, but that, he claimed, was “the reality in Gaza today.” He also said the PA had “condemned atrocities and genocidal attempts by IS (Islamic State) and others,” and had “never condoned the firing of missiles to Israeli civilians.”

In the wake of Abbas’s speech, Erekat said, the Palestinians would be presenting a resolution to the UN Security Council demanding a Palestinian state “to live side-by-side in peace and security with the state of Israel” based on the pre-67 lines. Israel, he said, would thus be “getting 78 percent” of mandatory Palestine; “I’m getting 22%.”

The resolution would also call on the parties to find solutions to all core issues of dispute, including the fate of Palestinian refugees. “We will still need a just and agreed solution to the refugees,” he said, “just and agreed with you.”

However, Israel has a government “that does not believe in a two-state solution,” he charged. “You have a government that believes in one state, two systems — the translation of this is apartheid. We will not accept a new apartheid regime by Israel.”

Responding to the interview, Likud minister Erdan, a member of Israel’s key eight-member security cabinet, said that the attitude of the PA leadership underlined that “in the coming years, there’s nobody to talk to.”

Erdan added: “We have to understand that we have a stubborn enemy… The right and left in Israel have to unite against this Palestinian plot to delegitimize the state of Israel.”

He dismissed Erekat’s statistics as part of the Palestinian “industry of lies,” and said he did not believe the PA’s purported readiness for a state on the pre-67 lines was anything but “tactical” — implying that the PA was ultimately seeking the elimination of Israel.

Rather than directly fostering terrorism, Erdan charged, Abbas was engaging in “political terrorism” against Israel.

Challenged by the radio interviewer over the government’s opposition to territorial withdrawal, Erdan said “Israelis have seen that any territory we left has been seized by terrorists. That’s what happened in Lebanon; that’s what happened in Gaza.” If it hadn’t been for the presence of the IDF, terrorists would have taken over the West Bank as well, toppling Abbas, he said.

He said Abbas’s security cooperation with Israel in the West Bank was a case of “self-interest,” because Abbas knew “terror groups in Judea and Samaria would otherwise bring him down too.”

In an earlier interview, with Israel’s Channel 2 on Sunday night, Erekat had also dismissed Israeli and American condemnations of Abbas’s “genocide” terminology, and said that “ignoring facts doesn’t mean they don’t exist.”

In his address to the UN, Abbas said 2014 was meant to be a year of international solidarity with the Palestinians, but blamed Israel for choosing to make it “a year of a new war of genocide perpetrated against the Palestinian people,” referring to Israel’s Operation Protective Edge.

US State Department spokeswoman Jen Psaki on Friday said Abbas’s speech “included offensive characterizations” that the US rejects, and Netanyahu called it “inciting,” “slanders and lies.”

Underlining the intensification of a Palestinian legal campaign against Israel, Erekat also said Sunday that the Palestinians were “planning now to join 522 international agreements, conventions, protocols,” including those “paving the way to the International Criminal Court.”