In a statement last week, Dajani wrote: "I will go to Ramallah, I will go to the university, I will put my photos of the visit on Facebook, and I do not regret for one second what I did. As a matter of fact, I will do it again if given the opportunity. I will not hide, I will not deny, I will not be silent. I will not remain a bystander even if the victims of suffering I show empathy for are my occupiers. And this is my final statement on this issue."

(Courtesy of Mohammed Dajani/ Handout Image ) - Mohammed Dajani, a Palestinian university professor, took 27 of his Palestinian students to Auschwitz last month on a project to learn more about the Holocaust and to study empathy. 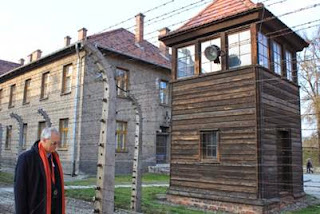