In a sane world, Israeli company SodaStream would be a poster child for corporate responsibility. Of the 1,300 staff in its West Bank plant, 450 are Israeli Arabs and 500 are Palestinians. All workers receive equal pay, which in the case of the Palestinians is several times the average salary they would normally make.

Here is a real-life example of coexistence, a place where Israelis and Palestinians, Jews and Muslims, Druze and Christians work together in peace. To boot, they assemble a product that, by turning tap water into fizzy drinks, cuts the production of environmentally damaging beverage containers.

Alas, this world is not sane, certainly not when it comes to discussions of Israel. Simply because one of its 20-plus factories is in the West Bank, anti-Israeli activists have been targeting SodaStream and its celebrity spokesperson, American actress Scarlett Johansson.

No matter that the factory is in a location that would most likely remain Israeli in a future peace agreement. And if it became part of Palestine, even better for the new state's tax revenues. But in the destructive world of supposedly pro-Palestinian activism, this facility must be boycotted, those 500 Palestinians and their families be damned. 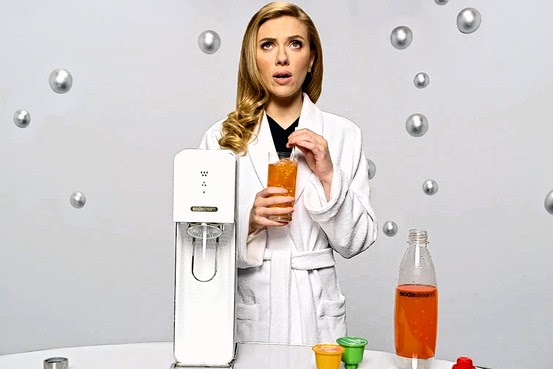 Unfortunately, the anti-Israel boycott, divestment and sanctions (BDS) movement is no longer a fringe phenomenon. Over the past few months, a number of European companies, such as Dutch water company Vitens and Denmark's Danske Bank have announced their divestment from certain Israeli companies due to their involvement in the West Bank.

It is quite a spectacle to see European companies suggest that it's unethical to do business with Israelis, while so many of their colleagues are flocking for new deals in Iran, the land of public stoning of adulterers and hanging of gays—but I digress.

European governments, such as those in The Hague and Copenhagen, that now claim to be shocked by and opposed to such boycotts, have in fact significantly assisted the mainstreaming of BDS. The European Union and its member states have long funded a number of non-profits that support the movement. What's more, last year, Brussels published new guidelines to prevent any EU funding from benefiting projects in the West Bank's settlements.

These guidelines were particularly strict with respect to financial instruments: Any Israeli bank with operations in the settlements was originally excluded from EU funding, even if the requested loan was meant for a project within Israel's pre-1967 borders. The logic was that EU money would otherwise free up the bank's funding for activities within the settlements.

Following negotiations with Israel, the rule was later toned down. But the EU did suddenly discover the principle of fungibility, the same concept it so strenuously rejects with respect to its generous funding of the Palestinian Authority. To this day, as the PA under President Mahmoud Abbas continues to incite against the Jewish state and pays salaries to convicted terrorists in Israeli jails, the EU insists that none of its money is being diverted for such purposes. Even the EU's own Court of Auditors criticized this lack of oversight in a report two months ago.

Lars Faaborg-Andersen, the EU's ambassador to Israel, warned Monday that if peace talks collapse due to settlement construction, Israel would face "increasing isolation. . . not necessarily because of any decisions taken at a government level but because of decisions taken by a myriad of private economic actors." Right, except the EU's guidelines must have given those private companies a pretty good idea of what the governments' position is on this issue.

What Mr. Faaborg-Andersen also suggested, and not for the first time, is that the Palestinians basically have carte blanche to once again break up the peace talks over settlements. The EU is playing with fire here. Having already walked away from three comprehensive Israeli peace offers, the Palestinians don't need extra encouragement to do so again. Pressure to finally accept a negotiated deal is needed

No matter what one thinks about the legality or wisdom of these settlements, they are a political reality. Without finding a workable solution for them there will be no sustainable peace agreement between Israelis and Palestinians. And EU diplomats know perfectly well that the only workable solution will be for Israel to keep certain settlement blocks and Jewish neighborhoods of Jerusalem in exchange for territory on the Israeli side. The official EU position actually accepts such mutually agreed land swaps.

Yet the EU's absolutist outlook, as expressed in its guidelines, makes finding such a pragmatic solution more difficult. It turns off average Israelis who don't consider Jewish neighborhoods in Jerusalem to be criminal operations. It helps harden the position of Palestinians, who know they can always walk away without being blamed. And it fuels an anti-Israel boycott movement that is not interested in a peaceful solution, but motivated by enmity toward Israel.

If the EU wants to remain an honest broker in the peace talks, it needs to stand up now and send two clear messages: It must unequivocally reject the boycott of Israel. And it must warn the Palestinians not to use settlements or any other excuse to break up the peace talks.

Mr. Schwammenthal is the director of the AJC Transatlantic Institute.