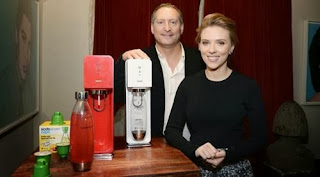 The Forward went to the SodaStream factory in Mishor Adumim and spoke to the CEO, Daniel Birnbaum.

Birnbaum is not at all a right wing fanatic. Far from it. He is as liberal a person as you can find. He does not support Israel's claim to Judea and Samaria. He would not have set up the factory in Mishor Adumim, but it was there when he took over the company. And he shows that he is far more pro-Palestinian than all of the "pro-Palestinian activists" combined.

[T]hough he wouldn’t have opened the factory at its current site, Birnbaum said that its presence here is now a reality, and he won’t bow to political pressure to close it — even though the company is about to open a huge new plant in the Negev, within Israel’s internationally-recognized boundaries, which will replicate all functions of the West Bank plant, and dwarf it.

The reason for staying is loyalty to approximately 500 Palestinians who are among the plant’s 1,300 employees, Birnbaum claimed. While other employees could relocate on the other side of the Green Line if the plant moved, the West Bank Palestinian workers could not, and would suffer financially, he argued.

“We will not throw our employees under the bus to promote anyone’s political agenda,” he said, adding that he “just can’t see how it would help the cause of the Palestinians if we fired them.”

...Birnbaum’s advisor, Maurice Silber, said that within the company “everybody is against the occupation.” But it does not follow, he said, that because SodaStream operates in an occupied area, it violates human rights. Eventually, he said, SodaStream could become the “seed of the future Palestinian economy.”

The Arab workers clearly support Birnbaum - showing that claims to the contrary from Israel haters are a lie.

At the plant’s cafeteria, awareness of the current international controversy over Scarlett Johannson’s new role at the company was clearly widespread among employees. During the Forward’s visit, Birnbaum took to the cafeteria floor to give some 250 Palestinian workers a kind of pep talk about the issue, urging them to ignore the political attacks. “We are making history for the Palestinian people and the Israeli people,” he told them in Hebrew, followed by a translator who rendered his comments into Arabic. Birnbaum reassured the workers about their jobs and said he wanted to bring “more and more hands” into the factory as SodaStream grows.

The Palestinians applauded these comments. But then Birnbaum added with a flourish: “Scarlett Johannson would be proud of you!” And at the sound of Johannson’s name — even before the translation — applause among the assembly of mostly male, 30-something Palestinian workers burst out again, palpably louder.

So who cares more about Palestinian Arabs - SodaStream or the Israel haters?

With each passing day, the answer becomes more and more obvious.

This SodaStream "controversy" was manufactured out of whole cloth by people with an anti-Israel, not a pro-Palestinian, agenda.

It is backfiring on them, as the world sees that the people obsessed over SodaStream don't care one bit about real live Palestinians.

The Arabs who work for SodaStream make it clear whose side they are on. And their actions and words show just how much the anti-Israel crowd lies.

The world is waking up to these lies.

Expect to see some furious logical obfuscation in the hate sites as they try to pretend that they know better than Palestinians what Palestinians want.

How Israel-haters use interview bias in SodaStream stories

The SodaStream story brings up an interesting point about journalism itself.

So far, since last year, we have seen four different media outlets interview workers at the SodaStream plant in Mishor Adumin.

This was followed by the Electronic Intifada hate site, referring to the video that Sodastream put out about its Arab workers:

“I feel humiliated and I am also disgraced as a Palestinian, as the claims in this video are all lies. We Palestinian workers in this factory always feel like we are enslaved,” M. said.

...When asked if there was discrimination between black and white Jews, M. replied, “Yes, for sure. You will not [find] white Jews wearing yarmulke [a skull cap] doing the hard work or ‘hand work.’ The supervisors who run the factory are mainly Russian and they are managed mainly by the white Jews, and we are ‘Palestinians,’ only workers.”

Then came the article from The Forward that I referred to previously:

That was followed by a new Reuters piece written by Noah Browning:

One mid-level Palestinian employee who spoke to Reuters outside the plant, away from the bosses, painted a far less perfect picture, however.

"There's a lot of racism here," he said, speaking on condition of anonymity. "Most of the managers are Israeli, and West Bank employees feel they can't ask for pay rises or more benefits because they can be fired and easily replaced."

I have pointed out in the past that Noah Browning is a very poor reporter with a definite anti-Israel bias.

So we have a case study here. Four reports, two contradicting the other two. Which is accurate?

Obviously, Electronic Intifada has no journalistic integrity whatsoever. It is literally impossible to believe that their reporter would ever admit that some Arab employees are happy. If she interviewed ten workers and only one was critical, that would be the one quoted.

I've shown that Noah Browning is biased. I would not be surprised if he called up EI and asked for the name of the person they interviewed last year to save himself some effort of finding a disgruntled employee himself.

JTA and the Forward are both Jewish publications. But both are very left wing and anti-settlement. They are both highly critical of the Israeli government. The Forward just published an op-ed from Peace Now advocating boycotting SodaStream. It would be difficult to say that they are biased towards finding workers who would sing the praises of SodaStream. Yet - that's who they found.

So who is more credible? The answer is obvious.

If SodaStream was treating its workers like slaves, they would be leaving and finding other jobs. That does not seem to be the case here.

I'm not saying that the person (or people) interviewed by Browning and EI is lying. Every company has disgruntled employees. Any reporter can, and often does, play the game of finding just the right person to support the reporter's pre-existing bias. This is how journalists can lie with facts.

And this is almost certainly what we are seeing here from Reuters and Electronic Intifada.