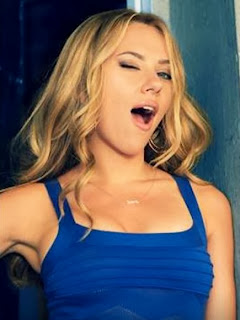 Palestinian workers back Scarlett Johansson's opposition to SodaStream boycott
Palestinians workers at the SodaStream factory in an Israeli settlement in the West Bank say they would be the losers of a successful consumer boycott of the fizzy-drink maker.

The Israeli company SodaStream has come under fire for its factory (c.) in Mishor Adumim, an industrial zone located in the desert hills west of the Israeli settlement Maale Adumim.

American actress Scarlett Johansson has been criticized as naïve and irresponsible for endorsing SodaStream, an Israeli company that operates a factory in the West Bank settlement of Maale Adumim – to the detriment of Palestinian rights, say critics.

The Jewish actress's promotion of the company in a Superbowl ad has propelled an international campaign to boycott the home sodamaker and today forced the actress to step down as a global ambassador for the humanitarian agency Oxfam.

But those most familiar with the factory – Palestinians who work there – largely side with Ms. Johansson.

"Before boycotting, they should think of the workers who are going to suffer," says a young man shivering in the pre-dawn darkness in Azzariah, a West Bank town cut off from work opportunities in Jerusalem by the concrete Israeli separation wall. Previously, he earned 20 shekels ($6) a day plucking and cleaning chickens; now he makes nearly 10 times that at SodaStream, which also provides transportation, breakfast, and lunch.

As a few dozen men in hoodies and work coats trickle out of the alleys to the makeshift bus stop where they wait for their ride to the factory, another adds, "If SodaStream closes, we would be sitting in the streets doing nothing."

The SodaStream controversy is part of the international Boycott, Divestment, and Sanctions campaign, which Palestinians launched in July 2005 as an effort to force Israel to end the occupation of the Palestinian territories, recognize Israeli Arab's full rights, and promote the Palestinian right of return.

Speaking anonymously on a largely deserted street, with no Israeli SodaStream employees present, all but one of those interviewed said they opposed the boycott, given the lack of alternative job opportunities in the West Bank. That underscores Israeli claims that a boycott would be counterproductive, undermining the cooperation and prosperity that could boost peace prospects in the region.

However, lawyers and labor activists say the picture is not that clear. While Palestinians earn roughly twice as much working at Israeli businesses in the West Bank, they lack labor rights and undermine Palestinian national aspirations. But many have little option; the Palestinian Authority has failed to leverage billions of dollars of aid to create more job opportunities.

Why Palestinians work at Israeli companies

By any measure, Israel's economy dwarfs the Palestinian economy, with a gross domestic product (GDP) of $252 billion compared to $8 billion, due in part to Israeli restrictions on Palestinian travel and trade that thwarts business. Every port, border crossing, and airport accessible from the Palestinian territories is controlled by Israel with the exception of a pedestrian-only crossing at Rafah, Gaza, which is controlled by Egypt.

Per capita GDP in Israel is more than 10 times that of Palestinians, while Palestinian unemployment (23 percent) is more than triple the Israeli rate (7 percent), according to figures provided to the Monitor by the Manufacturers Association of Israel.

That has prompted about 69,000 Palestinian workers – 10 percent of the Palestinian labor force – to work in the Israeli economy, where those who manage to secure a permit or risk working illegally earn an average daily wage of 164 shekels ($47), compared to 84 shekels ($24) in the PA economy.

Omar Jibarat of Azzariah, the father of a newborn, is one of those who works in Israel, leaving home well before 6 a.m. for a construction job in Tel Aviv. Though he makes good money, he spends four hours in transit every day and would rather work at the SodaStream factory 15 minutes away.

"I would love to work for SodaStream. They're quite privileged. People look up to them," Mr. Jibarat says. "It's not the people who want to boycott, it's the officials."

That's a common refrain among the SodaStream workers who show up after Jibarat catches his ride.

Leaning up against the cement half-walls of the bus stop, jackets pulled up over their cold hands and faces and cigarette butts glowing in the dark, they blame the PA for failing to create jobs while taking a political stand against Israeli business that do.

"The PA can say anything it wants and no one will listen because it's not providing an alternative," says one man, a 2006 political science graduate of Al Quds University bundled in a jacket bearing the SodaStream logo. As for reports that the company doesn't honor labor rights, that's "propaganda," he says. "Daniel [Birnbaum, the CEO of SodaStream,] is a peacemaker."

Mr. Birnbaum told the Jewish Forward this week that the West Bank factory has been a "pain" due to all the criticism. But he says he's committed to his Palestinian employees, and sees the company as providing a haven of coexistence that can boost prosperity and prospects for peace.

"I'm not going to throw them to the street. I have an obligation to these people," he said in a video made by the company last year. "My hope, my prayer, my belief, and my responsibility at SodaStream is that we will fulfill the prophecy from the book of Isaiah: nation shall not lift up sword against nation, nor shall they learn war anymore. Instead of learning war, let them learn how to make a sodamaker."

What's behind the boycott movement

But many supporters of peace on both the Israeli and Palestinian sides insist that even if companies like SodaStream enable individual Palestinians to earn a better livelihood, they are part of a broader settlement enterprise that is detrimental to individual rights and national aspirations.

Today more than half a million Israelis live in East Jerusalem and the West Bank, which were conquered in Israel's 1967 war with its Arab neighbors. The United Nations has declared settlement of these areas to be in "flagrant violation" of the 1949 Fourth Geneva Convention, which governs the treatment of civilians in occupied territory.

One of the workers waiting for the SodaStream bus this morning says he hates the fact that he's working in an Israeli settlement, and lies to people when they inquire about his work.

"I'm ashamed I'm working there," he says. "I feel this is our land, there should be no [Israeli] factory on this land."

While Israeli labor laws technically apply in the settlements, labor rights organization Kav LaOved says it is poorly enforced. Inspections, which are considered the essence of labor law enforcement, are reportedly sparse. Abed Dari, the organization's field coordinator in the Jordan Valley and Mishor Adumim, the industrial zone where SodaStream's factory is located, estimates that 95 percent of Palestinian employees of Israeli businesses in those areas do not earn the minimum wage of 4,300 shekels ($1,230).

Dari says SodaStream is one of the few companies in Mishor Adumim that does pay minimum wage, but adds that his organization's worker hotline received a complaint about some 100 workers being fired recently, due to "seasonal" hiring practices. Workers in Azzariah mentioned that some fellow workers had recently been let go, which they attributed to boycott pressure.

As one of Israel's largest food and beverage exporters, which ships to 45 countries, SodaStream indeed has international reach – and thus is potentially more vulnerable to international opinion. But Yonah Lloyd, president of SodaStream, says the company does not act in response to boycott pressure.

"The Palestinian employee base in the last five years has grown from 100 to 500," Mr. Lloyd says. "And it will continue to grow."

In a country where families can include everyone from left-wing peaceniks to strongly ideological settlers, the SodaStream issue has generated debate among relatives and friends. It has also led to heated Facebook conversations over the relative importance of Palestinian prosperity and freedom – and the best way to achieve both.

"I think it's a really tough thing, and we're weighing two different important values," says Elisheva Goldberg, a writer in Jerusalem who says it's critical to remember the limitations facing Palestinians working in Area C under Israeli occupation.

"If their other option is to go and pluck chickens, what does that say about the space they're living in, the barriers they're facing?"

But for the Palestinian workers in Azzariah, their main priority is feeding their families – or preparing to start one.

"SodaStream is my hope, to enable me to get married, to get everything," says the former chicken worker, as the sun rises over the littered street. Then he steps on the bus to go to work.