Israel publishes list of Palestinian inmates to be freed

Among prisoners slated for release this week are killers of 76-year-old gardener, celebrated professor and other civilians 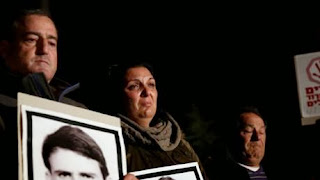 Israelis, some of whom have lost relatives to Palestinian terrorism, hold aloft placards and pictures of terror victims during a protest against the upcoming release of Palestinian prisoners, outside the prime minister's residence in Jerusalem, Saturday, December 28, 2013 (photo credit: Hadas Parushl/Flash90)

A panel of Israeli cabinet ministers on Saturday night approved a list of 26 Palestinian prisoners to be released on Monday in the third phase of a four-stage series of releases agreed on when peace talks with the Palestinians were resumed earlier in 2013.

All of the prisoners on the list (Hebrew PDF), save three, were convicted of murdering Israeli civilians, soldiers or Palestinians suspected of collaborating with Israel. In a press release Saturday night, the Prime Minister’s Office said all of the inmates had been convicted of offenses committed prior to the signing of the Oslo Accords in 1994.

Almost all of them were given life sentences, although a few would have been up for release in the next decade. They have all served between 19 and 28 years of their terms.

Following are the names of the prisoners slated for release, as published by the Israel Prison Service on Saturday night, along with their offenses.

·        Muhammad Yusuf Adnan Elafandi, arrested May 13, 1992, for stabbing two youths in Jerusalem. After the attack, his life was saved by an Israeli woman who defended him from a lynch mob. He was convicted of attempted murder. The woman who saved his life, Bella Freund, was the subject of a song by the hip hop band Hadag Nahash, in collaboration with rocker Barry Sakharof.

·        Farid Ahmed Shahade, arrested February 16, 1985, for the murder of Yosef Farhan, a suspected collaborator with Israel, in Jaffa.

·        Abu al Rub Mustafa Mahmoud Faisal and Kamil Awad Ali Ahmad, convicted of murder in the killing of 20-year-old IDF soldier Yoram Cohen in a shootout in the West Bank town of Jenin. Ali Ahmad was also convicted of kidnapping, torturing and murdering 15 Palestinians suspected of collaborating with Israel. Faisal was convicted of manslaughter in four of those cases.

·        Damara Ibrahim Mustafa Bilal, arrested June 16, 1989, and convicted of murdering Steven Friedrich Rosenfeld, 48, a US-born immigrant to Israel. Damra and several others accosted Rosenfeld outside the West Bank settlement of Ariel, grabbed the knife he was carrying, and stabbed him to death with it. His body was found on the following day by a Palestinian shepherd.

·        Abu Mohsin Khaled Ibrahim Jamal, arrested April 10, 1991, and convicted of murder. Abu-Muhsan ambushed Shlomo Yahya, a 76-year-old gardener, in a public park in Moshav Kadima and stabbed him to death.

·        Tamimi Rushdi Muhammad Sa’id, convicted of kidnapping and murdering Hayim Mizrahi at a Palestinian-owned farm outside the settlement of Beit El, where Mizrahi lived, in 1993. Mizrahi had come to the farm to shop for eggs.

·        Silawi Khaled Kamel Osama, one of three Palestinians convicted in the murder of Motti Biton. Similar to Mizrahi, Biton was shot while he was shopping for groceries in a Palestinian-owned store. Afterwards his wife, who was in the car outside, fired at his attackers, who detonated a pipe bomb and fled. Biton was gravely wounded in the attack and died in an Israeli hospital three days later. Osama was also convicted of murder and manslaughter in the deaths of four Palestinians suspected of collaborating with the authorities.

·        Sawafta Sudqi Abdel Razeq Mouhlas, who stabbed Yosef Malka (Malkin) to death on December 29, 1990, during an attempt to rob his home in Haifa.

·        Barham Fawzi Mustafa Nasser, arrested December 20, 1993, for the murder of Morris (Moshe) Edri. Nasser, a former employee of Edri, 65, ambushed Edri and stabbed him in the back. After he was apprehended, he said he had carried out the murder to prove that he was worthy of joining Hamas.

·        Mahmad Naim Shawmra Yunis, convicted of murder in the death of Yossef Hayun, a police sapper who was killed while attempting to disarm a bomb in Moshav Shekef in June 1993.

·        Mahmud Muhammad Salman, arrested May 6, 1994, and convicted in the murder of Shai Shoker. Salman strangled Shoker with a shoelace outside Tira on February 2, 1994.

·        Abu Hadir Muhammad Yassin Yassin, convicted of murder. Yassin shot Yigal Shahaf, 24, in the head while Shahaf and his wife were walking through Jerusalem’s Old City toward the Western Wall. Shahaf died in hospital on the following day. The murder weapon had been bought from a Jewish Israeli. Yassin was slated for release in 2016.

·        Muammar Ata Mahmoud Mahmoud and Salah Khalil Ahmad Ibrahim, convicted of murdering Menahem Stern, a history professor at Hebrew University. Stern, 64, a winner of the prestigious Israel Prize, was stabbed to death while walking to work at the university’s Givat Ram campus on June 22, 1989. A monument in his memory figures in a scene from the prize-winning Israeli film “Footnote.” Ibrahim was also convicted in the murder of Eli Amsalem. In addition, the two murdered a Palestinian suspected of collaborating with Israel, Hassin Zaid.