Slightly before the attack, former Shin Bet chief Yuval Diskin said the Palestinians were ripe for a Third Intifada. However, Defense Minister Moshe Ya’alon said that recent attacks were isolated incidents, insisting that “there is no sign of a popular uprising or so-called Third Intifada.” 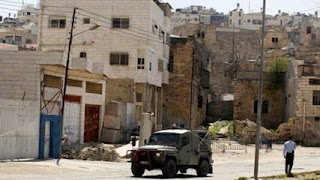 Three Palestinians suspected of planning to carry out terror attacks against Israeli civilians were killed Tuesday during a joint Shin Bet and Israel Police operation in the West Bank town of Yatta, south of Hebron, the army said. The operation marked a sharp departure from the disorganized, home-grown terror of recent weeks.

Two of the suspects, whom the army said were members of a “Salafist jihadi” group, were shot dead in their car after they refused to surrender themselves to security forces. They were carrying “explosive devices and 2 handguns,” the army said in a statement. A third man was killed in a gun battle “following a hot pursuit,” IDF spokesman Peter Lerner said.

No Israeli soldiers were injured in the incident.

The IDF said the organization to which the two belonged had over the past months attempted to set up an extensive military infrastructure across the West Bank. The organization had planned to target Palestinian Authority structures and personnel, in addition to Israeli soldiers and settlers, the statement said.

Israeli security forces learned of the planned attack after arresting several of the organization’s members near Nablus and the West Bank settlement of Yatir over the past few weeks.

“This terrorist network is just a sample of those who try to harm Israeli civilians and undermine the existing security stability,” Lerner said.

“Operational access combined with quality intelligence gives us the upper hand on these evildoers and their beastly intentions,” he added. “It is our obligation to prevent them from fulfilling their detestable fantasies.”

Israeli defense officials and analysts have warned in recent weeks that the West Bank may be heading for another violent uprising, citing a rise in the number of rock-throwing and Molotov cocktail attacks.

Earlier this month, a couple driving along a road in the West Bank near the settlement of Tekoa were hurt after their car was attacked with a Molotov cocktail.

A day earlier, a Palestinian man was killed at a checkpoint in Abu Dis near Jerusalem after he tried to stab a Border Police guard, Army Radio reported, and another Palestinian man was shot to death at Tapuah Junction, near the West Bank city of Ariel, when he fired a flare gun toward Israelis at a hitchhiking post.

The recent rise in violence was not confined to the West Bank, as terror attacks crossed over the Green Line and into major Israeli cities.

In mid-November, a Palestinian teenager stabbed 19-year-old soldier Eden Atias multiple times in the neck on a bus at the central bus station in Afula.

The assailant, 16-year-old Hussein Rawarda, had entered Israel illegally in search of work and apparently decided to carry out the deadly attack after failing to be hired by an Israeli employer.

Slightly before the attack, former Shin Bet chief Yuval Diskin said the Palestinians were ripe for a Third Intifada. However, Defense Minister Moshe Ya’alon said that recent attacks were isolated incidents, insisting that “there is no sign of a popular uprising or so-called Third Intifada.”

Yifa Yaakov contributed to this report