Is the US floating the Ben Arieh territorial swap plan?

A few years ago, Professor Yehoshua Ben-Arieh came up with a tripartite land-for-peace  plan between the PLO, Israel and Egypt that would - in theory - add to Middle East stability.

Ben-Arieh proposes that Israel give a small piece of land from its southern Negev in the area of Wadi Paran on the border of Egyptian Sinai which would become Egyptian territory. Egypt could then build a land bridge to Jordan that could also transfer Egyptian - owned oil, gas and water pipelines. In return for this land, Egypt would transfer an area similar in size ( around 600 square kilometers) located to the south of Rafah in the Gaza Strip. The coastline would extend 20 kilometers towards El-Arish from the present Israeli - Egyptian border and the area would extend inland into Sinai from the coast. In lieu of the territory that the Palestinian Authority would receive from Egypt, the PA would agree to transfer to Israel a similar area in size to Israel - exactly the same area that it will get from Egypt south of Rafah. This would involve West Bank land around the Israeli towns of Maale-Adumim, Jerusalem and Ariel.

He envisages the possibility of building a Palestinian sea and air port in the new area and economic development to raise the poor standard of living of Gaza residents. The Egyptians would also gain an important economic asset by being able to build the land bridge leading to Jordan, Saudi Arabia and the rest of the Arab world. All three sides, the Palestinians, Egypt and Israel would benefit from such a territorial swap - neither side would lose any territory in what is a realignment serving the interests of all three parties. Ben-Arieh notes that the idea of territorial exchange is not new in the Arab world - Jordan and Saudi Arabia redrew their borders in order to allow Jordan to expand its Red Sea port at Aqaba.

This plan, while as unlikely as any other, has some intriguing components. The idea of a land bridge from Egypt to Jordan has traditionally been a huge issue in the Arab world, as Israel is the only thing that interrupts Arab land contiguity from Morocco to the Gulf. Egypt strenuously tried to win parts of the Negev in negotiations after the War of Independence to keep the southern Negev, and Israel was equally adamant that it didn't want to be further surrounded by enemies.

The land bridge could facilitate travel between African Muslims and Mecca, and it might even be able to replace the proposed corridor between the West Bank and Gaza. Of course, Israeli security is still an issue, but the idea of using that as a bargaining chip is quite creative.

Under this plan, Gaza's size quadruples, and it gains lots of shoreline to boot.

Now, Egypt's El Watan is reporting that the US is quietly shopping the Ben Arieh plan to European and Arab governments, and it calls the plan "diabolical" as it attempts to move some Palestinian Arabs to Arab lands, which is anathema.

The newspaper claims to have maps that the US has been pushing, although the only map it reproduces is in Arabic. 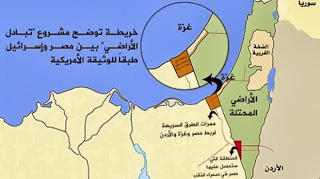 The plan noted by El Watan also includes a (presumably Western) infusion of $150 billion to Egypt (and perhaps the PA) as well as a water desalination plant for Egypt.

I don't know if this plan is really being socialized by the US, but compared to other "peace plans" out there, this one has some merits/ Which means, by definition, it would be dismissed. I do have to believe that behind the scenes the "land bridge" idea from Egypt to Jordan and Saudi Arabia would tempt some Arab leaders.