Bassam Aramin, whose 10-year-old daughter was killed by IDF rubber bullet, visits Jerusalem's Holocaust museum, says 'I surely can identify with feeling like a refugee – humiliated, weak, lost – but the tragedy of the Holocaust is very different'

Ahmed al-Jaafari, a 43-year-old Deheishe refugee camp resident, stands opposite the list of Jews who were sent to the Sobibor death camp. At a certain point, he turns to the guide, Roee Hanani, and asks "why did they keep such an organized list if they planned on killing them all along?"

Hanani replied him in Arabic "the Nazis were very organized. They believed that they were solving a world problem and wanted to take pride in what they did."

As part of a unique "Combatants for Peace" trip to Yad Vashem, eight Palestinian Authority residents visited the museum to learn of the fates of European Jews during the Holocaust.

"This was a jolting experience for me," said al-Jaafari. "I saw the reactions of people who were here and wanted to experience it for myself. I heard and read about and saw movies on the Holocaust, but nothing comes close to a visit in which I can see it with my own eyes. I don't understand how the world conspired a crime like this." 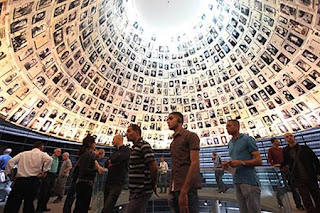 Al-Jaafari continued by making a few comments with which Jews can identify, but likely to cause Palestinians to become irate. "When you look at the background of the Jewish nation, you can try to understand your anxiety and fears. A nation that went through something like this cannot live without scars. I don't agree with the comparison between the Holocaust and the situation in the territories, and people who make this comparison make it out of pain and anger."

"Combatants for Peace" was established by a group of Israelis and Palestinians who participated in what they call the "circle of violence" in the region," and have now abandoned their weapons in favor of peace and coexistence.

However, not all the Palestinians who registered for the tour, made it to Yad Vashem. This is due to the difficulties they had attaining entrance visas into Israel.

Upon arrival to the station dedicated to the Righteous Gentiles, Hanani told the participants about a devout Muslim couple that hid the Jewish Habilio family in their home in Sarajevo. The couple also took the father in, who managed to escape a labor camp. The Habilio family immigrated to Israel in 1984 and turned to Yad Vashem; bringing recognition to the Hardega family as Righteous Gentiles.

The story did not end there. During the civil war which saw the collapse of Yugoslavia in the 1990s, Sarajevo was under massive attack. Yad Vashem and the Joint Distribution Committee brought Zaynba Hardega to Israel with her daughter, son-in-law and granddaughter. Zayba has since passed away, but the rest of the family still lives in Jerusalem.

Hanani explained to the group that there are still no Arab Righteous Gentiles, but the relevant committee is currently discussing a few cases in which North African citizens saved Jews during World War II.

"I began taking an interest in the Holocaust 20 years ago when I saw the movie 'Schindler's List,' said Bassam Aramin, who organized the tour on the Palestinian side. "Since then, I have seen it four times."

"Less than a month ago I was at the United States Holocaust Memorial Museum in Washington. When you arrive at a place like this, you forget who you are. This is a tragedy that cannot be described in words."

Some five years ago, Aramin's 10-year-old daughter was killed by an IDF rubber bullet. When he hears comparisons being made between the territories and the European Holocaust, he becomes indignant.

"This is a big mistake. These are very different things. As a person who lives under occupation, I surely can identify with feeling like a refugee – humiliated, weak, lost – but the tragedy of the Holocaust is very different," said Aramin.

Nabil, another participant, said that he didn't think twice about joining the tour. "As soon as I was called I said I was coming. I heard a lot about the Holocaust and wanted to see Yad Vashem with my own eyes. I am not afraid of reactions from the Palestinian side. I think that everyone needs to come here and see it with their own eyes."