IDF archives reveal David Ben Gurion's demand from Allied Forces of Jewish army to fight Nazis; else, he warns, 'Your hands will be soaked in Jewish blood'; excerpts censored by British now published

"In the name of all Jews, we demand of you, rulers of England, Russia and the United States, our right for a Jewish army," thus David Ben Gurion opened his 1942 speech calling on the allied forces to let Jews form an independent force to fight the Nazis.

The speech was revealed in its entirety by the IDF archives and the Defense Ministry, including the parts rejected by the British censor for hinting at Jewish independence.

The bold text, including the opening phrases, are the parts erased by the censor. The full speech will be made available online by the IDF. 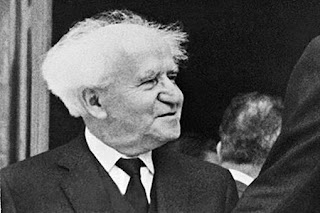 The speech continues: "… Our right to fight the greatest of our enemies as Jews, in a Jewish framework, Jewish organization, Jewish headquarters, Jewish discipline and under a Jewish flag. 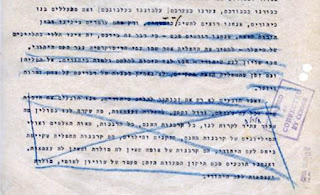 The speech, courtesy of the IDF archives and Defense Ministry

"Our needs will not be met by the crumbs allowed us here to protect our homeland and the surrounding countries."

Hitler's regime, Ben Gurion foresaw, would be vanquished, but "we do not know if the victory of democracy, liberty and justice will not find in Europe an immense cemetery strewn with the bones of our people, men and women, old and young."

He continues: "The Jewish people's delegates are called today to challenge from Zion, before the world, the spilling of our Jewish blood"

He does not know how many were already killed and how, Ben Gurion said, but their massacre "is due solely for one sin, that these are Jews. For only Jews have no protector, no warrior."

Ben Gurion pled the allied forces' leaders to "prevent the annihilation of a jailed, shackled, defenseless nation," and urged them to allow Jewish children to immigrate to Palestine.

"Reject the disgraceful edicts to the effect that a Jew from an enemy state isn't allowed to return to his homeland. As long as this shameful decree exists, as long as our land's gates are shut to Yisrael's refugees, your hands will be soaked in Jewish blood, spilled in the Nazi inferno."

In the speech, Ben Gurion demands the British to allow Jews to fight the Nazis as a Jewish army: "Every Jew will carry proudly the yellow star, and if we meet our brother from the Nazi ghettos we'll carry them on our arms with the yellow star. It will be a flag of honor, a mark of martyrs and saints.

"Not the Nazis, but you, civilized nations, are dishonoring us when you deprive our right as a people, an equal nation, of our right to fight Hitler as Jews."

At the speech's climax Ben Gurion calls for Jewish independence in Palestine: "And we demand not only our right to fight as Jews, we demand the right that every nation in world has, be it big or small, for an independent homeland.

"All the unnecessary victims, all the thousand, hundreds of thousands and maybe millions of victims are the product of discrimination of the Jewish nation.

"These are the victims of a nation which has no country and no freedom. We demand of you to correct this wrong: Equal national standing, homeland and independence for the Jewish people."

Ben Gurion concluded: "We'll do what we can to avenge you and we'll give ourselves no quarter until we save you from the Nazis and from the atrophying Diaspora, and we'll bring you, all of you, to us, to our salvaged land."