PCHR does not identify them as "militants," but all three were terrorists.

The obituary for Darwish explains that he joined the Qassam Brigades in 2007, after attending UNRWA schools. Here he is: 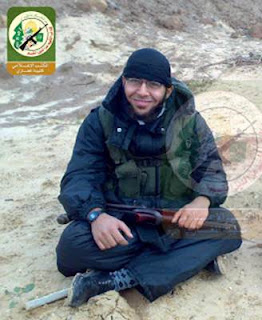 The other two have not yet been memorialized at the Qassam site, but Qassam Brigades memorial posters for them have already been published:

Amjad was no civilian. His obituary at the Al Qassam site notes he joined the terror group in 2005, where is is praised for firing Qassam rockets and mortars at "settlements," as well as for working on weapons tunnels and for fighting during Cast Lead.

At approximately 21:00 [November 16], an Israeli warplane attacked a motorcycle on which Khaled Khalil Ali al-Shaer, 25, was traveling near Saladin Street. He was killed and 2 persons were wounded.

Once again, PCHR does not identify the casualty as a "militant" as they do with some of the others. Meaning that they counted him as one of the supposed "civilians" killed in Gaza.

And once again, they are lying.

Other fake civilians can be seen on this tag.