Palestine Today reports that billboards to "Thank Iran" for Gaza's "victory" have been popping up all over Gaza. 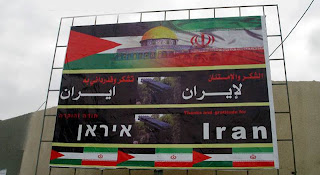 An analyst interviewed about these billboards (almost certainly paid for by pro-Iranian terror groups like Islamic Jihad) pretends that these are somehow spontaneous expressions of thankfulness by Gazans of Iran.

Specifically, Iran created "Quds Day," an annual bashfest against Israel; they provided Fajr-3 and Fajr-5 rockets to the terrorists, most of which were shot down but which they still claim is the source of their faux victory; and Iran provided training for the terrorists of Gaza.

The analyst noted that Arab countries were not nearly as helpful as Iran, and hoped that they would start actively funding Gaza's militants.