Debunking "The Map that Lies" 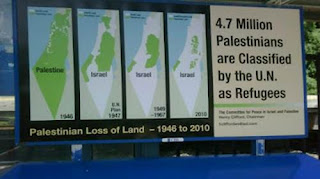 Advertisements at train stations in suburban New York depicting shrinking Palestinian territory in Israel are riling some critics who say they are “deliberately misleading and inaccurate,” FoxNews.com has learned.

The ads, which were purchased by The Committee for Peace in Israel and Palestine, show the “Palestinian Loss of Land” from 1946 to 2010. An accompanying headline reads: "4.7 million Palestinians are classified by the U.N. as Refugees."

Henry Clifford, co-chairman of the group, told FoxNews.com he paid $25,000 to display posters at 50 Metro-North Railroad stations for 30 days. They are to “educate and inform people” on the proper historical context of the region, he said.

“There’s always room for discussion of different sides of every story, but there’s no room for discussion on fact,” Clifford said. “Anyone who challenges these maps and the content of these ads, it’s they’re obligation to show that they’re historically wrong. The ball is in their court.”

Excellent! This gives me the chance to repost this:

This map is a lie.

The first panel has the biggest lie:

Only a tiny percentage of land in Palestine was privately owned. The various categories of land ownership included:

By the early 1940s Jews owned about one third of Mulk land in Palestine and Arabs about two-thirds. The vast majority of the total land, however, belonged to the government, meaning that when the state of Israel was established, it became legally Israel's. (I believe that about 77% of the land was owned by the government, assuming 6 million dunams of private land as shown in this invaluable webpage on the topic from which I got much of this information.)

To say that the green areas were "Palestinian" land is simply a lie.

Now the next one:

While this is an accurate representation of the partition plan, it has nothing to do with land ownership. The entire purpose of this map is to make it appear that Israel has been grabbing Arab land consistently, to serve as a bridge between maps 1 and 3. What is not said, of course, is that Israel accepted the partition and the Arabs did not, so as a result Israel in 1949 looked like it does in map 3.

Map 3 is still a lie, however, because in no way was the green land "Palestinian" at that time. Gaza was administered by Egypt and the West Bank annexed by Jordan. No one at the time spoke about a Palestinian Arab state on the areas controlled by Arab states - only in Israel.

In other words, this progression of maps is a series of lies meant to push a bigger lie, and it is tragic that a lot of people believe them to be the truth.

Here is a small attempt on my side to show a more accurate picture of Israel's giving land it controlled up for peace since 1967: 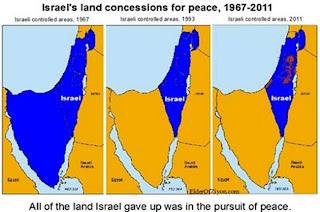 This map shows that Israel gave up control of the Sinai, Gaza, Southern Lebanon and much of the West Bank over the years. Rather than falsely accusing Israel as a land-grabbing rogue state, it accurately shows Israel as perhaps the only state in history that has voluntarily given up more than two-thirds of the areas it controls in exchange for nothing more than a paper agreement - or sometimes not even that. All at the risk of serious security concerns for her people, no less.

This is all because Israel wants, desperately, to live in real peace with her neighbors. This desire is not reciprocated by those neighbors, unfortunately.

The real map shows the truth of Israel's incredible concessions in the often vain hope for peace.

Now, as far as the right-hand side of the ad goes, I have debunked that as well; my most recent one was this post from less than a month ago.

So, Mr. Clifford, I've shown how every pixel in your posters are historically wrong.

Will you answer me, or admit the truth?

The ball is in your court.

(By the way, as of two days ago, the webpage for the organization named in these ads has received fewer hits total in its history than I receive an hour.)