Today is the 70th anniversary of Hitler meeting the Mufti

Germany stands for an uncompromising struggle against the Jews. It is self-evident that the struggle against the Jewish national homeland in Palestine forms part of this struggle, since such a national homeland would be nothing other than a political base for the destructive influence of Jewish interests. Germany also knows that the claim that Jewry plays the role of an economic pioneer in Palestine is a lie. Only the Arabs work there, not the Jews. Germany is determined to call on the European nations one by one to solve the Jewish problem and, at the proper moment, to address the same appeal to non-European peoples....At some not yet precisely known, but in any case not very distant point in time, the German armies will reach the southern edge of the Caucasus. As soon as this is the case, the Führer will himself give the Arab world his assurance that the hour of liberation has arrived. At this point, the sole German aim will be the destruction of the Jews living in the Arab space under the protection of British power.
---Adolf Hitler to Haj Amin Al-Husseini, mufti of Jerusalem, November 28, 1941

The Mufti of Jerusalem was the undisputed leader of Palestinian Arab nationalism from the 1920s through the 1940s, and his hatred of Jews pervaded all he did.

It will be recalled that the Mufti was given his position by the British because he was regarded as a "moderate." This is what gave him the platform to start his career of inciting against and murdering Jews in earnest.

He was responsible for the anti-Jewish pogroms in Palestine in 1920, 1921 and 1929; he initiated the deadly riots from 1936-1939, and he initiated contact with the Nazis as soon as they came to power in order to come up with ways to work together with them to get rid of the Jews.

Not only that, but towards the end of the war, he pulled out all the stops to murder Jewish children rather than have them rescued - even when the desperate Nazis were considering swapping them for money or for German prisoners. Meaning that his desire to murder Jews exceeded even that of Hitler himself.

The Mufti was an unrepentant anti-semite and desired nothing less than the complete genocide of the entire Jewish people, every man, woman and child.

Today, November 28th, is the anniversary of the Mufti's seminal meeting with Hitler where the Fuehrer explained his genocidal plans in detail to his kindred anti-semite.

Today, the Mufti of Jerusalem is considered a hero among Palestinian Arab leadership.

One year ago, Mahmoud Abbas said in a speech, 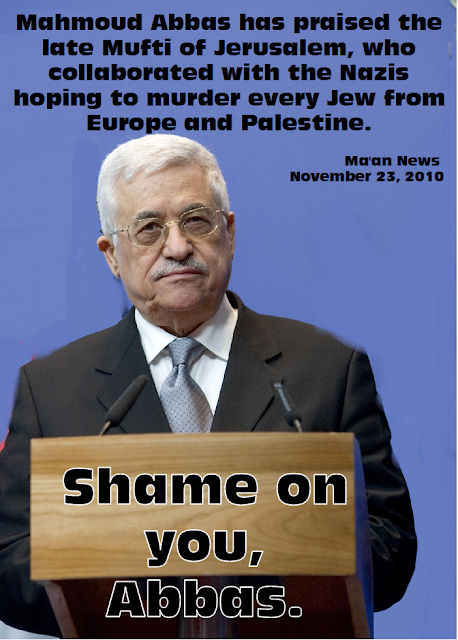 The Mufti isn't a Palestinian Arab hero despite his Jew-hatred.

He is a hero because of it.