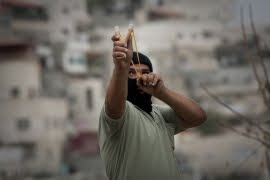 JERUSALEM — Ariel Sharon, who went into a coma almost five years ago, is soon to be moved from his hospital bed to his ranch on the edge of the Negev Desert. If he came out of his coma (his doctors say he never will), the former Israeli prime minister could be forgiven for thinking peace had been made in the years that he lay in Sheba Medical Center near Tel Aviv.

A recent Time magazine cover bore a daisy chain Star of David and the headline: "Why Israel doesn't care about peace." The story inside detailed how Israelis were too busy drinking at bars, eating at restaurants and sunning themselves on the beach to care about the peace talks which are just under way.

The author could've just as easily zipped along to the Palestinian town of Ramallah, which abuts Jerusalem to the north, and pulled together a similar story. The city's nightlife has exploded in the last year or so with new clubs and bars opening each month. It isn't just United Nations workers who frequent the fusion restaurant called Orjuwan or the painfully loud dance floor at SnowBar, just down the road from the refugee camps and across the street from Yasser Arafat's tomb. These are young, wealthy Palestinians who are living as though Ibiza came to the West Bank.

What Sharon would soon figure out — because he was nothing if not shrewd — is that some Israelis and Palestinians are tired of waiting for peace to be negotiated and have decided to live as if there already were peace.

I've been in Jerusalem since 1996. All the recent headlines about "freezing settlement building" or "security control over holy sites" are repetitious to the point of utter inanity. A revived Sharon would probably think he'd actually gone back in time to Benjamin Netanyahu's first term as prime minister in the late-1990s, when negotiations crawled along at a desperately dull pace. What I've observed lately is that Israelis and Palestinians are as tired of living through peace negotiations as I am of writing about them.

Of course, it's always dangerous for a journalist to suggest that someone "doesn't care." In the Middle East, that person is most likely to be engaged in something else when he chats with the reporter, but just as easily could be sprung back into caring deeply as soon as violence erupts. The Palestinians rioting in East Jerusalem Wednesday, for example, after violence on the Temple Mount, appeared to care about something.

Either that or they just wanted to throw some stones and work up a sweat, which is another cause for rioting that journalists often overlook — teenage male testosterone.

Palestinians and Israelis want peace. The Time article picked up rather on the fact that both peoples are sick of the energy it takes to follow these frequently pointless talks. To some, that looks like a lack of desire for peace. I'd call it a reflection of the fact that everyone knows what sort of peace deal could be achieved, if only the politicians would put away their fears of being condemned by their own extremists.

The focus of most journalists is, in fact, those very extremists. They cause the most damage and make the loudest noise. They're not the majority. That's what makes them powerful, too.

When most of the people around them are keen to live as if there were peace — as if those extremists didn't exist — then the power to change events lies with the extremists. They know there's not peace; they don't have to pretend. That's why a relatively small number of settlement activists are able to drag the Israeli government toward a renewed expansion of its colonies in the West Bank, which may cripple the new negotiations almost before they've begun.

In the same way, it's Hamas in the Gaza Strip, not the U.S.-backed Fatah in Ramallah clubland, which dictates how far Palestinian leaders are able to go in their talks with Israel.

Coming out of his coma, Sharon would recognize that situation. In the Middle East, some things don't change.