Classic misoziony in the art world

(Misoziony is my term for rabid, pathological hatred of Israel and Zionism. It is my opinion that it is just as irrational and dangerous as anti-semitism.)


Two paintings by Norway's Haakon Gullvaag that show an Israeli flag have been withdrawn from an exhibition at the French Cultural Centre in the Syrian capital, the artist said on Monday.
His "Terra Sancta" exhibition contains works about the Israeli offensive against the Islamist-ruled Gaza Strip in December 2008 and January 2009.

Two of the works in which the Israeli flag features were removed from the show on Saturday, an angry Gullvaag told AFP by phone from Oslo, adding the French embassy in Damascus "explained to us that it was their decision.

"This was done without contacting the artist, the curator or the Norwegian embassy. I have never experienced something similar in my entire life."

The artist said the French embassy said it had concerns about a hotel near the cultural centre which normally has many Iranian guests. 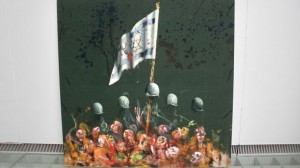 "They were afraid that the Iranians would misunderstand the motifs as being Israel-friendly. Then the cultural centre claimed that some students have complained about showing the Israeli flag at all," Gullvaag said.

And what were the pictures that had the Israeli flag that were pulled out of fear that people would think they were too pro-Israel? 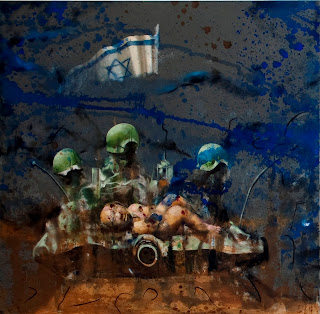 One is simply called "The Flag". It shows an Israeli flag, splattered with blood, standing in a pile of human skulls.

The other one, a detail in a 3-part series called "Invasion Triptych," shows an IDF tank with a dead Gaza child on top where an Israeli flag is partially visible.


Try to wrap your head around that one.

We have a Norwegian artist, a French cultural center and the Syrian/Iranian art lovers, all vying to see who can outdo the others in their public, visceral hatred and demonization of the Jewish state.

The exhibition was already shown in Beirut and it travels next to Israel's peace partners in Amman, Jordan.

UPDATE: One other angle: notice that the wire services don't bother to describe the paintings themselves, because their narrative is of the poor artist being censored by a French embassy, not the fact that the artist is filled with bile - that would just distract from the story.
Gepost door Brassé-Limburg pm maandag, november 01, 2010