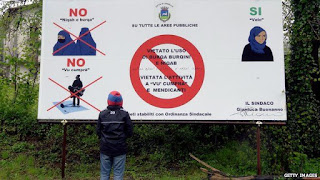 In a region rife with ironies, one of the least reported is that the same people who lecture to Israel about discrimination are far more discriminatory towards Muslims than Israel is.

There was much coverage about Israel passing a law to limit the heavily amplified Muslim call to prayer to during normal daytime hours. Yet most (if not all) European countries restrict the call to prayer far more. In most European countries, many Muslim communities are so worried about Islamophobic backlash that the amplified call to prayer is not requested to begin with. In places where it is allowed, it is often restricted to Fridays only, or only twice a day in the case of the East London Mosque. In Norway it is limited to Fridays only and cannot exceed 60 decibels.

Even the Netherlands, which explicitly allows the Muslim call to prayer as law, "the way in which it is carried out, the permitted volume and the number of times (it is not normally allowed for all five daily prayers) is pragmatically regulated by the local authority. In Amsterdam, for example, as in many other places, it is only allowed on a Friday, and in all cases there is a decibel limit that must not be exceeded."

All of these laws are far more strict than Israel's.

All of these restrictions in virtually all European countries are far greater than Israel's law. Yet no one speaks about it as a violation of human rights. Only Israel is singled out for its much milder restrictions. And I can tell you that even they are not being enforced yet, as I heard the amplified call to prayer as early as 4:10 AM from my Jerusalem hotel.

Several Belgian municipalities have used municipal by-laws on face-covering clothing to ban public wearing of the niqab and burqa.

In Bosnia and Herzegovina, lawyers, prosecutors and others employed in judicial institutions can not wear the hijab to work.

In 2016, a legal ban on face-covering Islamic clothing was adopted by the Bulgarian parliament.

The government of Kosovo banned the headscarf in schools in late 2009.

A legal ban of face-covering Islamic clothing was adopted by the Latvian parliament.

In December 2016, Chancellor Angela Merkel of Germany said the wearing of full-faced veils should be prohibited in Germany "wherever it is legally possible".

In Austria, the ruling coalition agreed in January 2017 to prohibit full-face veils (niqab and burka) in public spaces such as courts and schools.

France became the first European country to ban the full-face Islamic veil in public places in 2011.

A law banning the full-face veil came into effect in Belgium in July 2011.

Several towns in Italy have local bans on face-covering veils.

In Spain, the city of Barcelona announced a ban on full Islamic face-veils in some public spaces such as municipal offices, public markets and libraries in 2010.

In Denmark in 2008, the government announced it would bar judges from wearing headscarves and similar religious or political symbols in courtrooms.

It is illegal to wear a face veil in public in the Tessin region of Switzerland.

The European Court of Justice ruled that employers have the legal right to ban staff from wearing the Islamic headscarf.

Beyond the call to prayer and the restrictions on clothing, Switzerland has banned building minarets on mosques since 2009. Slovakia has passed a law which will effectively ban Islam from gaining official status as a religion. In the French town of Charvieu-Chavagneux, the mayor bulldozed a mosque in 1989 and today Arabic is forbidden to be taught in schools.

Israel has no such restrictions.

Yet the EU spends money to teach Israelis tolerance. Israel has far more Islamic terror attacks than all the European nations combined yet the EU lectures Israel on how it fights terror - in ways that are far more tolerant of Islam than Europe is.

Who should be teaching whom about tolerance?