With the Palestinian population approaching two million, a new World Bank report says that if no measures are taken by 2020, Gaza will no longer have usable water; While Israel provides technical support and advice, new wastewater plants are needed.

As the Palestinian population in the Gaza Strip approaches two million people, the water crisis is growing more serious. A new report by the World Bank finds that if no measures are taken by 2020, Gaza will no longer have usable water.

Currently, most of Gaza’s water comes from the underground aquifer that runs below Israel, Egypt, and Gaza. But over-pumping has led to high levels of salinity and nitrates in the water that make drinking it dangerous. 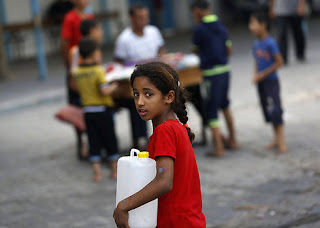 “I would say that 96.5 percent of the water in Gaza is far from international standards,” Rebhy al-Sheikh, Deputy Head of the Palestinian Water Authority in Gaza, told The Media Line. “A safe yield from the aquifer is 55 – 60 million cubic meters per year, while the demand for both domestic and agricultural use is 200 million cubic meters per year. We over-extract the aquifer and that affects the water quality.”

Most Palestinians in Gaza, he said, do not trust the water quality from their taps and so buy water from tankers, a solution that is expensive and has its own health risks.

“There are some 150 operators who provide some kind of desalinated water that has been filtered to make it acceptable for drinking and for cooking,” Adnan Ghosheh, a senior water and sanitation specialist with the World Bank told the Media Line. “It’s more expensive and not an improved source of water, according to our definitions of water clean enough to drink.”

That water can have bacteria, Al-Sheikh says, and the bacteria can grow as the water sits in people’s homes.

“It can affect their digestive systems,” he said. “Sometimes people go to the hospital and they don’t even know what caused their illness.”

Part of the problem is political. Under the 1993 Oslo accords, Israel agreed to supply a certain quantity of water to Gaza.

But the population in Gaza has grown significantly, and the Israeli-Palestinian Joint Water Committee has not met in years. Israeli officials say the Palestinians are not interested in meeting, while Palestinian officials say they will not approve more water for Jewish communities inside the West Bank, which already receive large allocations.

The situation is further complicated by the Islamist Hamas movement, which both the US and Israel see as a terrorist organization.

Palestinians in Gaza say the solution must be both desalination plants and wastewater treatment facilities. There are already three small desalination plants in Gaza under construction that will supply 13 million cubic meters of water per year, which will bridge the gap short-term. 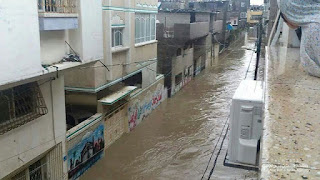 “The priority is to secure resources and supply, and of course improve wastewater management,” Ghosheh of the World Bank said. “We have a wastewater treatment project in North Gaza. It started as an emergency response project, but is currently working on a long term solution where the treated water will be used for irrigation, saving potable water for drinking and other uses.”

Israel is one of the world’s leaders in using treated wastewater for agriculture and al-Sheikh says that Israel has provided technical support and advice.

Ghosheh says that a wastewater treatment plant will benefit Israel as well as the Palestinians.

“Everyone agrees that environment does not have boundaries,” he said. “When a wastewater treatment plant is developed, this will serve the interests of all parties because otherwise the wastewater is going to flow to the other side.”

The long-term solution, both agree, is for a large desalination plant to be built in Gaza, called the Central Gaza Desalination Plant. It will cost half a billion dollars, and Arab states have already given a commitment to cover half of the cost. Israel will also have to give its approval to allow the necessary construction materials into the Strip.

Reprinted with permission from The Media Line