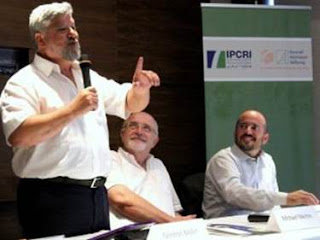 The main problem with the logic of the campaign is that Israel’s control over Palestinian territories will never end without an Israeli-Palestinian agreement.

It has become increasingly difficult for organizations and individuals working on peace building projects to bring Israelis and Palestinians together. Beyond the difficulties of physical movement and the need for permits for Palestinians to enter Israel or for Israelis to enter the Palestinian Authority areas (permits are issued by the Israeli army), the popular campaign among Palestinians to boycott Israel and Israeli organizations makes it difficult for Palestinians who wish to participate to do so. The anti-normalization campaign, as it is called, believes Israel should be denied legitimacy and recognition as long as the occupation of the West Bank and east Jerusalem continues.

The main problem with the logic of the campaign is that Israel’s control over Palestinian territories will never end without an Israeli-Palestinian agreement and no such agreement is possible without Israel and the Palestinians negotiating and reaching an agreement to end the conflict.

I have never supported normalizing the reality of occupation. Throughout my entire life I have worked to end the occupation, to create an independent Palestinian state next to Israel and to reach Israeli-Palestinian peace and the end of conflict. I have no idea how the “anti-normalizers” intend to advance their goal by not talking to me. It is such a foolish idea and needs to be rejected by Palestinians all over, by the Palestinian leadership and by the whole world. Enemies never end their conflicts by not talking. The goal of Palestinian society should be to engage every single Israel everywhere in Israel – especially right-wing Israelis.

This is just one example of what Palestinians need to do to help themselves. I have had numerous discussions with PA President Mahmoud Abbas on the issue of Palestinian textbooks and incitement.

I had one conversation about this with Yasser Arafat about two months before he died. The Palestinian response to charges of incitement and problems in their textbooks has been: let’s reconstitute the trilateral (US, Israeli, Palestinian) anti-incitement committee to work on it. Or they say, when Israel agrees to change their textbooks, so will we. The Palestinians make a justified claim that Israel is the more powerful of the two parties and should take the initiative. The Palestinians are right, but what if Israel doesn’t take the initiative? How long will the Palestinians wait? I am trying to encourage the Palestinians to take that first step, not as a favor to Israel, but in their own interests. Arafat signed a letter of recognition of Israel’s right to exist on September 13, 1993, yet in Palestinian textbooks, it is clear that no such recognition exists. Palestinian leaders state that they support the twostate solution on the basis of the June 4, 1967 lines, but that strategic decision does not exist in Palestinian education.

Palestinian textbooks clearly state that the occupation began in 1948 and then expanded in 1967. No map in Palestinian textbooks indicates Israel’s existence and there is even a poem taught in an Arabic- language textbook that praise martyrdom – clearly a reference to suicide bombings or knifings. Palestinian leaders talk about Jerusalem being the holy city to three monotheistic religions, yet their textbooks make reference only to Islam and Christianity, suggesting that the Jews have no legitimate connection to Jerusalem.

So which is it? What the Palestinian leaderships states or what is taught in the textbooks? I want to be clear: Israel is also guilty of the crime of omission in its textbooks, not recognizing the legitimate rights of the Palestinian people for a state of their own, and Israeli textbooks should be improved to indicate the political reality which is supported by the majority of Israelis and by the prime minister. But there is absolutely no reason why Palestinians should wait for Israel to change their textbooks.

Palestinians have so much to gain by taking the first step and proving to the world, and to their own people, that they truly are genuine partners for peace, committed to living in peace side-by-side with the State of Israel. The PLO committee created by President Abbas for engaging with Israeli society, headed by Mohammed Madani, whose special VIP status was recently removed by Defense Minister Avigdor Liberman, should take the lead on an “anti-anti-normalization campaign.”

The Boycott, Divestment and Sanctions (BDS) movement is doing more harm to Palestine and Palestinian interests than a concerted, direct and strategic campaign to engage Israelis would. There is no liberation, end of occupation or peace for Palestinians without Israelis agreeing. There will never be an imposed solution to the conflict. So it is time to reject the notion that by not talking Israel will get on its knees and capitulate. Talking, working together, interacting, investing, creating a better future together is the surest way to reach a just peace.

The author is founder and co-chairman of IPCRI, the Israel Palestine Creative Regional Initiatives.