'The terrorist lunged at us, started stabbing my husband, then me. I tried to take away the knife, but I failed'

‘I yelled for help and they spat at me,’ says victim of Jerusalem attack

Adele Banita gives harrowing account of terror assault in which her husband Aharon and Old City resident Nehemia Lavi were murdered, and she was badly wounded 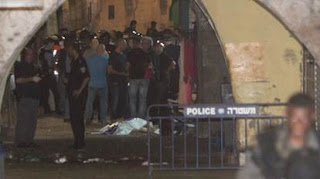 Israeli police outside the scene where a stabbing attack took place in the Old City of Jerusalem on October 3, 2015. (Yonatan Sindel/Flash90)

Adele Banita, one of the victims of Saturday night’s terror attack in Jerusalem Old City, gave a harrowing account of how the deadly stabbing assault unfolded and how her cries for help were ignored as her husband lay fatally wounded on the floor and she herself was stabbed.

“I yelled ‘please help me!’ and they just spat at me,” said Banita of the surrounding Palestinian shopkeepers whom she said looked on and did nothing as Palestinian terrorist Muhannad Halabi attacked her and her family in an alleyway near Lion’s Gate in the Old City.

The Banitas’ two-year-old son was also lightly injured in the attack. Their infant girl was unharmed.

Banita was taken in serious condition to Hadassah Hospital Ein Kerem in Jerusalem where she underwent emergency surgery overnight Saturday-Sunday. She regained consciousness on Sunday. Her husband died of his wounds at Shaare Zedek Hospital shortly after the attack. 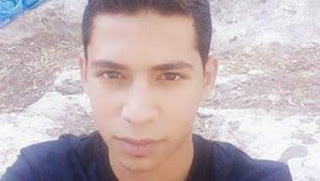 Muhannad Halabi, 19, the terrorist who killed two Israelis on October 3, 2015 in a stabbing attack in Jerusalem’s Old City. (Israel Police)

“When we got back from the Western Wall, we felt that something wasn’t right,” she told Ynet from her hospital bed Sunday.

“We started walking fast but the terrorist emerged from one of the stores and lunged at us and started stabbing my husband. My husband is a strong man and started fighting him, he punched him in the face. At that point, the terrorist started stabbing me. Then he went back to my husband and stabbed him again and again. I also fought him, I tried to take away the knife, but I failed,” she recounted. 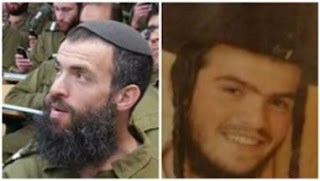 The victims of the fatal stabbing attack in Jerusalem on Saturday October 3, 2015 were named as Nehemia Lavi, 41 (left) from Jerusalem, and Aharon Banita, 22 (right) from Beitar Illit. (Courtesy)

Banita said Palestinian youths who saw the attack laughed and cursed at her as she yelled for help.

She said that one of them slapped her and another laughed in her face and told her to “drop dead” when she told him she’d give him a million shekels if he helped her get away with her two babies.

“They saw that we were with two baby carriages,” she said. 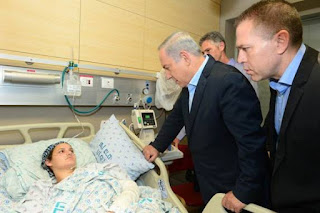 Banita — stabbed, bleeding and losing consciousness fast — said she used her last ounces of energy to run toward security forces for help.

“I said ‘I’m hurt, my husband is stabbed and my two babies are there alone,’ then I lost consciousness,” she said.

Nehemia Lavi, 41, an Old City resident who heard the screams, came to help and he too was stabbed and killed by the terrorist. 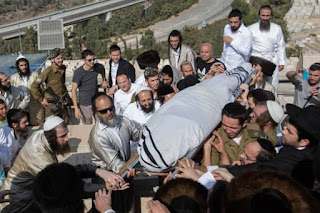 Friends and family carry the body of Aharon Banita during his funeral at Har HaMenuhot Cemetery in Jerusalem on October 4, 2015. Banita was stabbed to death by a Palestinian youth in a terror attack in the Old City, October 3. (Photo by Yonatan Sindel/Flash90)

Lavi and Banita were laid to rest Sunday at the Givat Shaul cemetery in Jerusalem. 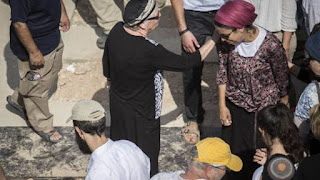 THe wife of Nehamia Lavi is seen at his funeral at Har HaMenuhot Cemetery in Jerusalem on October 4, 2015. Lavi was killed as he tried to help Jews stabbed in a terror attack by a Palestinian in the Old City. (Hadas Parush/Flash90)

In video footage that emerged from the attack, Halabi, a 19-year-old resident of al-Bireh near Ramallah, can briefly be seen lunging at one of his victims — it’s not clear who — and wrestling him to the ground. Adele’s screams can be heard as well as a baby’s wails. The video ends with the sound of gunshots. Throughout, shopkeepers and people can be seen either looking on or running away.

At the end of the video, one man nonchalantly takes a sip of his soft drink as he looks on.

The terrorist was shot dead by security forces at the scene.