Hamas: Members’ arrests in Henkin murders ‘honorable’ for us

Hamas welcomed on Monday the Israeli announcement that five members of its organization were arrested for murdering Naama and Eitam Henkin in the West Bank on Thursday — and again praised the terror attack, vowing there would be more.

In a statement issued Monday night after the Shin Bet security service revealed the arrest of a five-member Hamas cell in Nablus, the terror group did not explicitly take responsibility for the attack that left the couple dead in front of their young children, but promised that “this cell is not the first and will not be the last.”

“The occupation’s announcement of the arrest of the Nablus cell is an honorable announcement for our people and their resistance,” Hamas spokesman Sami Abu Zuhri said.

Zuhri added that Israel’s newly announced measuresto crack down on the recent wave of terror in Jerusalem and the West Bank “will not succeed in extinguishing the popular uprising [in the West Bank]… The march of resistance carries on, God willing.” 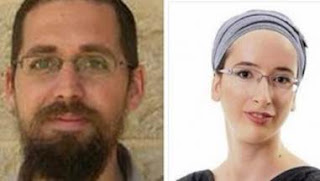 Earlier Monday, the Shin Bet revealed that, in an operation with the Israel Defense Forces and Israel Police, security forces arrested the Palestinian terror cell that killed the Henkins.

The suspects had been taken in for questioning by the Shin Bet and had admitted their involvement in the attack, a Shin Bet statement said, adding that the five cell members are Hamas members from Nablus.

The Israeli couple, both in their 30s, were driving in their car with their four children when they came under attack from Palestinian gunmen. The two were shot dead in front of their children; the children, all boys, were unharmed.

The investigation has so far revealed that the five cell members each had a specific role, the Shin Bet said. One person was responsible for clearing the way for the car that contained a driver and two gunmen. The fifth member of the cell, its commander, was not in the car.

A number of other people were arrested on suspicion of providing assistance to the cell, the Shin Bet said. 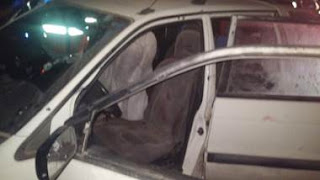 The car in which Israeli couple Naama and Eitam Henkin were shot dead in a terror attack near the West Bank settlement of Itamar on Thursday, October 1, 2015. (Courtesy: United Hatzalah)

The video below shows the arrest of one of the suspects at a hospital in Nablus, Channel 2 television said Monday night. The TV report said the attack was likely curtailed when one of the five was accidentally shot by another cell member and the gunmen sped away in order to seek medical assistance for him. That may be why the four Henkin children — aged 9, 7, 4 and 4 months — were not harmed.

The Shin Bet named the cell leader as Ragheb Ahmad Muhammad Aliwi, a previously jailed Hamas fighter from Nablus, who recruited the other four terrorists, instructed them how to carry out attacks and provided them with their weapons.

The other four were named as Yahia Muhammad Naif Abdullah Hajj Hamad, who carried out the shooting itself; Samir Zahir Ibrahim Kusah, the driver of the car who is linked to previous terror attacks; Karem Lufti Fatahi Razek, the gunman who was wounded by gunfire from one of his fellow cell members during the attack; and Zir Ziad Jamal Amar, who cleared the way for the car to carry out the attack.

All four are Hamas members from Nablus.

Razek was arrested in a hospital in Nablus by an undercover police unit. The other suspects were arrested at their homes and other locations.

The Abdel Qader al-Husseini Brigades, a group affiliated with Fatah’s al-Aqsa Martyrs’ Brigades, had claimed on Friday that it carried out the terror attack. In fact, said the Shin Bet, Hamas was to blame. It was not clear whether the killing was organized higher up the Hamas hierarchy.

Channel 2 said the suspects claimed to have carried out the killing in revenge for the firebombing of a Palestinian home in Duma two months ago, in which three members of the Dawabsha family were killed. That attack was allegedly the work of Jewish terrorists.