‘This is our country, there is no other,’ says teary-eyed Aharish in Arabic

Lucy Aharish, an Israeli-Arab news anchor and actress, was among the 14 torch lighters in the official ceremony kicking off Israel’s celebrations of 67 years of independence on Wednesday night. Almost breaking down at the ceremony, she was the only one of the honorees to give part of her brief address in Arabic.

Aharish, 33, a Muslim Arab whose parents hail from Nazareth but who was educated in Jewish institutions, instantly became a target of far-right criticism when it was announced earlier this month that she had accepted the honor of lighting a torch at the state Independence Day ceremony.

Some left-wing critics said her accepting the honor constituted an agreement to serve as a fig leaf of the government.

From the extreme right — Lehava, a group acting to prevent intermarriage and other integration by non-Jewish citizens in Israeli life — was prevented by the police from protesting against Aharish’s involvement in the event.

The group was planning to demonstrate outside the Mount Herzl cemetery in Jerusalem, where the ceremony took place, but did not receive police approval for the protest. 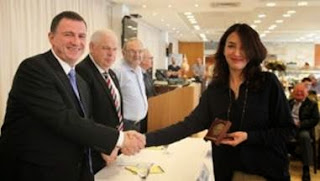 Aharish was teary-eyed when she took her turn at the ceremony, saying she was lighting the torch “for all human beings wherever they may be who have not lost hope for peace, and for the children, full of innocence, who live on this Earth.

“For those who were but are no more, who fell victim to baseless hatred by those who have forgotten that we were all born in the image of one God. For Sephardim and Ashkenazim, religious and secular, Arabs and Jews, sons of this motherland that reminds us that we have no other place. For us as Israel, for the honor of mankind, and for the glory of the State of Israel,” she said.

Aharish, the only Arab lighting a torch in the ceremony, also spoke in Arabic, saying: “For our honor as human beings, this is our country and there is no other.” 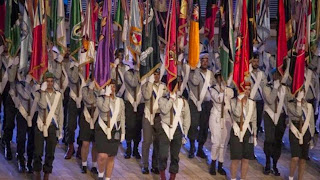 During Operation Protective Edge last summer, Aharish, who works as a news anchor at the i24News network, conducted an on-air discussion with a Hamas official in Gaza where she accused the terror group of using civilians as human shields and called on residents of Gaza to rebel against the Hamas regime there.

In an interview with the Times of Israel this week, Aharish defined her identity as Israeli first and foremost.

“Today, when people ask me ‘What are you?’ I say that I’m an Israeli,” she said. “I’m not ashamed of my Israeliness. Then I’m a woman, and then I’m an Arab Muslim. That’s the order: Israeli, woman, Arab Muslim.”

The theme of the 14 Israeli personalities chosen as torch lighters this year was “pioneers.”

The public committee that chose the torch lighters remarked that they were selected “because they achieved extraordinary and inspiring achievements, and made a significant contribution to Israeli excellence and innovation in different aspects of life, like science and technology, security, economics, medicine, agriculture, culture and sports.”