December in Haifa, when menorahs mingle with Christmas trees and crescents

Festival of Festivals celebrates the 3 major monotheistic religions plus Druze and Bah’ai minorities with a 200,000-strong street party 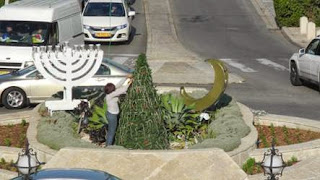 Over the past two weekends in December, Haifa’s artsy neighborhood of Wadi Nisnas has been overrun with soldiers in green uniforms. But these soldiers don’t have guns.

Instead, they have posters and petitions. “You light up my life!” reads one poster. Others gather signatures for petitions demanding people be happy and enjoy the holidays.

These “soldiers of love” are street performers at the popular Festival of Festivals in the mixed city of Haifa, Israel’s version of a “festivus for the rest of us” that celebrates the winter holidays of Jews, Christians, and Muslims. Over three weekends — Dec 12-13, December 19-20, and the upcoming December 26-27 — the festival is drawing approximately 200,000 visitors for a street fair with performances, exhibits, music, art, and plenty of traditional food, including a special “Christmas knafeh” or Arabic dessert.

The “soldiers of love” performance aims to upend the concept of soldier, a divisive subject fraught with meaning in Israel. 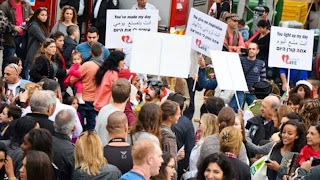 The festival began in 1994, when Christmas, Hanukkah, and Ramadan all fell around the same time in December. Because the Muslim lunar calendar does not have leap months like the Jewish lunar calendar, the holy month of Ramadan lands at different points every year, and this year the holiday took place over the summer. Still, the festival is committed to celebrating all monotheistic beliefs, as well as the city’s other minorities of Baha’i and Druze.

In a country where most people live in religiously segregated neighborhoods, Haifa remains dedicated to multiculturalism and coexistence.

The first year, the majority Arab Christian neighborhood of Wadi Nisnas — known for its large community of artists — invited Jewish and Muslim artists to collaborate on a small street festival. Since then, the festival has grown to one of the largest events in Haifa and a major economic engine for the city. The streets are crowded as hijabs mingle with Santa hats and a few kippot, with lights strung across the neighborhood and Christmas trees poking out of restaurant doorways.

“This festival is very important for people to give voice to their ideas, especially for people who come from outside Haifa and don’t live in a shared city,” explained Assaf Ron, the executive director of Beit Hagefen, an Arab-Jewish community center that organizes the festival. “Visitors can see that [Arabs and Jews] can sit together, you can enjoy the same music, Arab music or international music. The city puts a lot of money into it, because it’s an important message and because it brings people to the city.”

Many of the city’s museums host special exhibitions for the festival. There’s also an antique fair, a liturgical music concert series, crafts workshops, and plays for children and adults. There are also tours, such as the special “Inside the Trash Cans” (it rhymes in Hebrew) exploring what the city throws away, to raise environmental awareness about waste. This year, Ron was excited about the inclusion of “Conversation Jams,” a series of facilitated street conversations aimed at engaging visitors in conversations about difficult topics in Israeli society.

“It’s not connected to religion at all, it’s totally about multiculturalism,” said Danny Ronen, the director of Haifa’s Tourist Board. “For Israeli Jews to come here and see a Christmas tree and to see Santa Claus and all those things is really nice, it puts them in the spirit of Christmas.” Ronen noted that growing up abroad in France and Belgium, his family incorporated their celebration of Hanukkah into the Christmas spirit of those countries, and he enjoys the blend of holidays. “It’s almost like going abroad, it’s really nice because Christmas is a special atmosphere,” he enthused.

In the past, the city’s rabbis have been less than enthusiastic. Two years ago, one municipality rabbi threatened that any restaurants or event halls that displayed “non-Jewish holiday symbols” would lose their kashrut license, though the city was quick to revoke the letter.

The festival is part of Haifa’s bid to become a tourism hub for northern Israel. According to Ron, the city has just 1,400 hotel rooms, putting it on par with cities like Netanya or Nazareth. Ronen said improvements in the highway infrastructure have positioned Haifa as a good base for tourists to explore the north, though they face stiff competition from Nazareth for Christian tourists and the Galilee for tourists looking for a quiet northern vacation.

The summer Israel-Hamas war in Gaza makes a joint Arab-Jewish festival especially pertinent this year, organizers said. The ongoing terror in Jerusalem highlights the importance of building cultural bridges, especially because Haifa does not find itself dealing with the same kind of religious extremism found in Jerusalem, added Ronen.

“Bringing my kids to see the lighting of the Christmas trees on Ben Gurion Street is a blessing,” said Ron. “It helps us understand we’re not alone in the world. There are more people living beside us who have the right to enjoy the holidays. It won’t hurt my Judaism, it may even strengthen it, because true Judaism is pluralism.”

At the city’s main traffic circle in front of the Baha’i Gardens, a worker put the finishing touches on a large menorah, a Muslim crescent, and a Christmas tree, celebrating all three monotheistic religions in front of the holiest site for the Baha’i faith.

“You won’t make peace because of this festival,” declared Ron. “You do so because people get to know one another, and that’s what we’re doing all year round.”