The Meir Amit Intelligence and Terrorism Information Center has released its sixth analysis of people killed during Protective Edge. Here is their executive summary:

The number of names of those killed, examined so far by the Information Center, on the basis of lists of the Ministry of Health, is 900, that is - about 42% of the total Palestinians killed (said to be 2157, according to the Palestinian Ministry of Health report as of September 14, 2014). A number of the MoH duplicate names were removed and terrorists who do not appear in the lists (both due to technical reasons and because of the policy of concealment and deception of Hamas) were added.

After these adjustments the total number of fatalities investigated so far by the information Center reaches 1,017, or about 47% of the total fatalities.

Adding the current findings with the previous five reports and combining information about the identities of the dead identified indicate the following breakdown of the 1,017 fatalities examined by the Information Center:

Of the 874 fatalities that we could identify, terrorist operatives are some 49.8% of the names, uninvolved citizens are about 50.2%. The ratio between them may vary upon Further examination of the names of the dead. At this stage it was not possible to identify 143 deaths, representing approximately 14% of all the names.

As with the previous reports, the Center is researching in blocks of 150 names released by Hamas, this one covering the dates of July 23-26. They found 31 photos of the new batch of terrorists, including these: 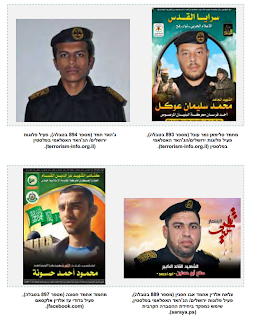