The only publicly moderate Palestinian Arab resigns from his teaching job

We have previously discussed Mohammed Dajani, the leader of the tiny Palestinian Wasatia party, who is essentially the only Palestinian Arab moderate enough to publicly endorse a statement drafted by an Israeli liberal giving Jews and Arabs completely equal rights to live in the territory of British Mandate Palestine.

Dajani is also the person who visited Auschwitz with some of his students to withering criticism from his fellow Palestinian Arabs.

It looks like he has resigned from his job over that episode: 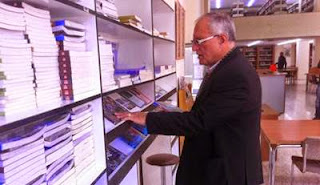 Mohammed Dajani, the Al-Quds University professor who received plaudits and threats earlier this year after leading the first organized group of Palestinian university students to the Auschwitz-Birkenau death camp, has resigned from the university after weeks of mounting pressure.

He heads the Department of American Studies and is the director of the Al-Quds University Library, which has just moved into an impressive new building.

Professor Dajani told Haaretz he felt he had no choice after the university authorities refused to back up their private assurances with a display of public support after what he described as a campaign of “incitement” against him from some members of the university faculty.

Following the Auschwitz trip, Dajani was denounced as a “traitor” and “collaborator” by Palestinian critics and expelled from a university staff union. He says it is important for Palestinians to understand their “enemy” – the Israelis – including the role the Holocaust plays in shaping Israeli policy and consciousness.

Dajani submitted a letter of resignation on May 18, hoping the university authorities would reject it and denounce the campaign against him. Instead, he received a response from the university personnel department that his resignation would take effect on June 1.

“I wanted the president of the university to take a stand by not accepting my resignation and in doing so to send a clear and loud message to the university employees and students, and in general, to the Palestinian community, that the university supports academic freedom and considers my trip as an educational journey in search of knowledge by which I broke no university policy, rules, or regulations,” Dajani said.

Dajanai said he decided to resign after his students were told that university officials had played an active part in the campaign against him, including his expulsion from the staff union – an organization he never joined in the first place. He was also dismayed that in its only official response to the trip, the university tried to distance itself from their professor, claiming he was "on leave" and acting "in a personal capacity."

In May, Dajani met with Prof Sari Nusseibeh, the outgoing university president, and Dr Imad Abu Kishek, the incoming president, who assured him privately that they were committed to academic freedom at Al-Quds, that he had broken no university rules in taking his students to Auschwitz and that none of the university’s leadership supported the campaign to oust him from the university. Dajani says he decided to test their resolve by submitting his resignation so they could reject it and give him their public backing – but they didn’t come through.

Dajani spoke at a peace forum in Israel last month, in English. The entire video is here.