Many of the official Palestinian Authority textbooks are online, and the books available for download.

So you don't have to be a university researcher to see what they say - you just need someone to translate them.

I asked good friend of EoZ, Al Gharqad, to do a quick survey of these materials and see if there is anything that might raise an eyebrow among normal, liberal Westerners. Here's what he found within only a couple of hours:
Second grade of primary school (7-8 years old kids), "National Education" 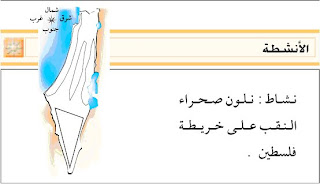 Tourism: lists "Palestinian" tourist sites, such as Caesarea, and Acco (p. 61) and Tzfat (p. 62).
Fifth grade (10-11 year old kids), "National Education"
p. 30: "The Palestinian people trace their origin back to the Cana'anites who emigrated to from the around 3,500 BC."
Ninth grade (15 year old kids), "Modern Arab History"
p. 54: "The European Imperialist powers began to spread the Zionist thought among the Jews themselves in order to hasten the creation of the state of Israel in Palestine, because of their common interests with the Jews on the one hand, and in order to get rid of them (of the Jews) and remove them from their countries on the other hand."
p. 56 ("Palestine after WW2"):
"Zionism transferred its base from the to the and chose the city of as its center because there was a large Jewish community there, and because many media and economic organs in the are in the hands of the Zionist movement."
p. 57 ("The Second Intifada – the Al-Aqsa Intifada"):
"(The Initifada) broke out in September 2000, for many reasons, among them: the failure of the Second Camp David Summit which was convened by USA President Bill Clinton between the Palestinian National Authority and Israel in order to outline the parameters of the permanent solution to the Palestinian issue, Israel's foot-dragging in carrying out the agreements it signed with the Palestinian leadership, and its attempt to establish facts on the ground through Zionist settlements in the West Bank, the Gaza Strip. The immediate reason for (the Intifada) was the entrance of Sharon, the leader of the Likud party, to the gardens of the Al-Aqsa mosque."
Modern World History for 10th grade (16 year olds)
p. 53, listed among the aims of Zionism:
"(For Israel to) Possess all the elements of economic and military power which enable it to defend itself, as well as attack, and offering services to the imperialist countries."
Palestinian Media Watch did a more comprehensive analysis in 2007, with lots more examples. But the things found here took essentially no time to find - it is endemic throughout the curricula.
Gepost door Brassé-Limburg pm donderdag, februari 07, 2013