http://elderofziyon.blogspot.nl/2012/11/arab-media-enamored-with-staged-video.html
This video is going around Arab websites and Facebook:

It is allegedly a girl, along with others, protesting her brother being arrested in Nabi Saleh last Friday, presumably for throwing stones.

Notice how the girl as well as the adult Arabs who are videoing her have absolutely no fear that the Zionist soldiers will hurt them. She even shoves a soldier at one point without thinking that he might retaliate.

The video is supposedly about the girl's bravery, but in fact it shows IDF forbearance.

If the IDF was as evil as they are portrayed in the Arab media, then why are none of the Arabs there afraid that they will be mowed down with bullets? After all, these sorts of actions in many Arab states would indeed be met with arrests, broken bones or deadly gunfire.

Apparently, the Arabs who are under Israel's punishing "occupation" know the truth of how the IDF acts is quite different from how it is described in rallies on Western college campuses.

But there is a punchline. 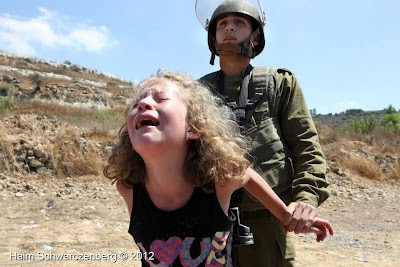 As Israellycool notes, this same girl, wearing the same shirt, was seen doing pretty much the same thing a few months ago:

What an astonishing coincidence! The very same girl, after becoming a poster child for Israeli brutality, is now back and trying as hard as she can to provoke soldiers again while a half dozen people are conveniently around to videotape her screams!

It puts this video in a whole new light, doesn't it?