"The people of Jordan do not accept Jews entering their homeland" 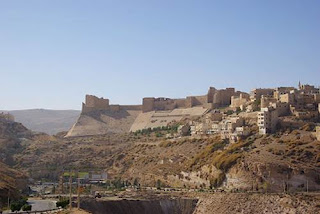 On Sunday afternoon, a group of Jews visited the Jordanian tourist site of Kerak in Jordan, where there is a Crusader castle and other sites.

So the Jordanian residents stoned them.

Salem Jeradat - who owns a grocery in the town - was surprised Sunday afternoon by a delegation of Jewish men and women who were wearing the clothing of religious Jews, which led him to throw his shoes at them.

"Then the people of the town immediately came to the group and they threw shoes and stones, and they kicked them out of town immediately." Jeradat continued, "The people of Jordan do not accept the Jews entering their homeland, and the Wadi Araba treaty between Jordan and the Zionist entity does not represent us."

The idea is that those who occupy Palestine and desecrate holy places should not be allowed to roam freely in Jordan. Citizens of the town gathered in the evening in a grocery and committed themselves to prevent Jews from returning to their town.

A Jordanian website helpfully added that the Jewish tourists were wearing "provocative hats."

None of the articles mention "Zionists." Just Jews.

But don't call them anti-semitic. They get angry.