"How to Wipe Out Israel" wins Iranian book award 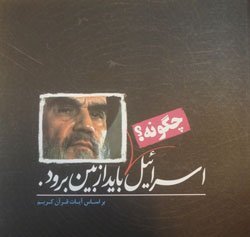 How to Eliminate Israel, a book written by a group seminarians in the city of Qom, was being promoted at the 13th book fair held in the north eastern Province of Khorasan Province, last week.

In an interview with RASA News, Hojjat ol’Eslam Mohammad Ebrahim-Nia, who headed up the team of writers, said: “How to Eliminate Israel won the Book of the Year award in the ‘soft war’ book category at the fair. Three thousand copies of this first edition of the 180-page book has been published by the Khorasan branch of the Ministry of Islamic culture and guidance. The book is seven chapters and it covers the Israeli mentality and weak points, the Israeli people’s crimes, warnings given to Muslims about the Jews in the Quran, and the effective methods of dealing with them. Also, other than current translations of relevant verses from the Quran, the book includes pictures of Zionists associated with the themes of the cited verses and relevant statements made by Jewish thinkers. The content and title of the book are based on religious rulings issued by Ayatollah Khomeini, who judged that the elimination of the State of Israel is a religious duty similar to other duties to which all Muslims are committed. The verses of the Quran which discuss the Jews are always applicable, and there is no other people about which the Quran warns the Muslims as much as the Jews, who continue their crimes against the Muslim nation.”

Ebrahim-Nia opined that there is generally a shortage of attention given to the struggle against Israel by the Iranian regime’s own institutions which should be considered the most dangerous enemy facing Muslims. He added: “The issue of Israel is evidently not a top priority for the government which is involved in dealing with other matters. I urge all young students and seminarians to turn the instructions of our Supreme Leader, regarding the adaptation of education of the seminaries to the needs of the society, into reality. If this is done, the enemy will know that the entire Muslim nation is committed to implementing the Supreme Leader’s instructions, and will not even dare threaten a military attack.”

In the original story at Raja News the book title is translated as "How Israel Should be Wiped Out."

But I'm sure that is simply a mistranslation. Middle East "experts" have vouched for the fact that Iran has no violent aims towards Israel.
Gepost door Brassé-Limburg pm woensdag, december 14, 2011