http://elderofziyon.blogspot.com/2010/12/burning-sheep-story-proven-fake.html
Remember the Arab farmer last week who claimed that evil extremist Jewish settlers had gathered his sheep in a group and burned them - on the Sabbath?

And that this ridiculous claim was instantly believed by  Uruknet, Islamic News Daily, PressTV, Ikhwanweb  and Mondoweiss?

Well, surprise surprise - he admitted he was lying. 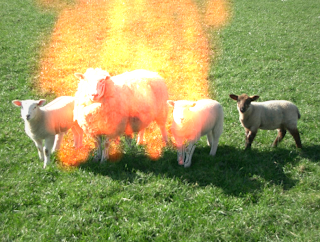 A Jordan Valley Arab farmer has exposed the tactic of leftists accepting Arab claims and falsely accusing Jews of attacking Arabs. He admitted that the "burning sheep" libel against Jews was meant to disguise his own blunder of losing control of a brush fire.

The Arab farmer, Samir Bani Fadel, claimed that four armed Jews approached him, chased him away, set fire to his field – which also is forbidden on Sabbath – and drove away as the fire spread and burned to death 12 pregnant ewes while injuring others.

Regardless of the doubts, the left-wing B'Tselem and Yesh Din human rights group rushed to allege that the supposed attack was another one of hundreds of supposed acts of vandalism by Jews against Arabs.

New York-based writer Philip Weiss promptly reprinted the libel on his Mondoweiss blog, and the image of sheep being cruelly burned aroused sympathy for Arabs and anger against Jews. "It was an awful sight," the farmer said. "I've lost at least $12,000."

The Palestinian Authority called on the international community to pressure Israel to stop "settler violence."

The tale began to unravel when Arabs pointed their fingers at residents of Itamar, an easy target as it is a religious community, but located almost an hour's drive from the scene of the fire. The story then was changed, with the blame being placed on the closer community of Maaleh Ephraim, most of whose residents are professionals and who almost never have been accused of any activities against Arabs.

Fadel finally admitted to police the whole story was a lie and that he was responsible for the fire, which he set to burn thorns before it spread beyond control. Blaming Jews not only would have saved him from the embarrassment of having burned his own sheep, it also would allow him to claim damages from the government while being hailed as a hero among Palestinian Authority Arabs and left-wing anti-Zionists.

Hundreds of accusations against Jewish residents of Judea and Samaria have been leveled in recent years, usually in claims that Jews attack or destroy olive trees, although evidence has been produced that in most cases the Arabs have simply pruned their trees, counted on lack of agricultural knowledge on the part of the media and leftwing groups, and then accused Jews of damaging them. Olive trees look hacked when they are pruned and months later, the supposedly damaged orchards have been seen to be full of fruit.

Another tactic has been to instigate violence, especially on the Shabbat when Jews are forbidden to take pictures, and then accuse Jews of attacking them.

A quick Google search shows that this story has already been reproduced in about 5000 websites.

Which proves the old adage, ironically mis-attributed to Mark Twain:: "A lie can travel half way around the world before the truth has time to put its boots on."
Gepost door Ratna pm maandag, december 27, 2010