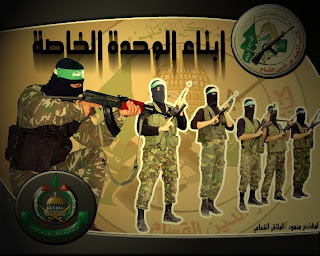 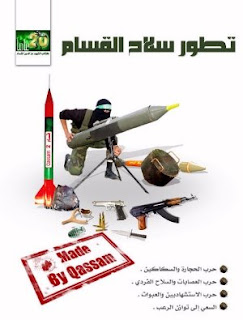 The magazine was delivered to The Associated Press and other news organizations by a Hamas employee on Monday. It was distributed to libraries sympathetic to Hamas, apparently targeting a highbrow readership.

The magazine, which is free of charge, aims to "educate Palestinians" about the role of the military group, said Abdul Latif Qanou, a Hamas official who helped oversee its publication.
The magazine wants to show "the development of our fighting capabilities and show progress on the ground," he said. Hamas officials would not say how many they printed or whether there would be future editions.
Hamas also won't say how much the magazine cost to publish. It looks expensive, a stark contrast to the environment that produced it - the crumbling, impoverished Gaza Strip.
It's also a huge step up from Hamas' humble media beginnings 20 years ago, when the movement's activists spray-painted announcements on walls and secretly distributed handwritten tracts in mosques.
The magazine's title is a reference to the military wing's name, the Izzedine al-Qassam Brigades.
The cover is shiny green, Hamas' traditional color, and the masked gunman on the cover appears emerging from the number 20 - the group's age.
Inside, the magazine describes Hamas' military wing as an "army."
"It has more than 10,000 fighters with weapons who are a real army under military formations," the magazine claims. Israeli military commanders have recently noted that Hamas has transformed from a loosely organized band of cells into a proper military force.
The section aimed at women is illustrated with lilies and hand grenades. One photograph shows women training to use guns while wearing floor-length robes in military khaki.
A chart details Hamas attacks, including 2,252 rockets it said it has fired at Israel. Rockets fired by Hamas and other militant factions in Gaza have killed 12 Israelis since 2001 and have drawn military raids and crippling sanctions that have pushed the territory further into poverty.
Most Gaza residents live on less than $2 a day, poverty that has intensified since Israel and Egypt sealed their borders with the territory after Hamas came to power, and militants continued to rain rockets on Israeli towns. Only humanitarian aid, limited amounts of fuel and power and a trickle of commercial goods have entered from Israel since then.
Hamas has used the closure to whip up anger in the Arab world, painting a picture of poverty and hunger in Gaza. But that hasn't prevented the Islamists from building up a costly media machine.
Last year it launched a daily newspaper, which frequently publishes exclusive interviews with Hamas leaders. The group also runs several Internet Web sites, a radio station and a satellite television station that broadcasts news and children's shows. Plans for a Hollywood-style media center are in place, too.
Hamas is less tolerant of independent media. It has harassed reporters and media outlets it sees as hostile, and a Hamas-dominated court last week ordered the closure of al-Ayyam, a paper associated with its moderate Fatah rivals, because it published a caricature of a senior Hamas official.
The new Hamas magazine is another sign that the once-secretive militant group is acting more like a government concerned with its own image, said Palestinian analyst Talal Okal.
"There's a difference between (revolutionary) cells where you don't know numbers, weapons or leaders. Now Hamas is responsible for Gaza and relies upon i?s military st?ength," Okal said.
The 82 page Qassamis magazine can be viewed in pdf at the militiant group's website.
Sources:  News agencies,  Elder of Ziyon
On: Friday, February 15, 2008 - By: Israel e News
http://www.israelenews.com/view.asp?ID=1079
Gepost door Ratna pm zondag, februari 17, 2008