Yesterday, I reported that Virgin Megastores in both Qatar and Bahrain had featured an  Arabic version of Mein Kampf as "recommended" books to read for their customers.

The UAE-based National picked up on the story, and received a statement from Virgin in Doha:

Virgin Megastore Middle East is a regional leader in retail entertainment, offering our customers a wide range of products in many languages, genres and interests to satisfy the demand of our consumers across CDs, DVDS, electronics, gadgets and toys, multimedia games and accessories and books.

Each Virgin Megastore in the Middle East is responsible for the merchandising of products within its respective store and is not merchandised via a planogram from headquarters.

Recently, one of the region's Virgin Megastores included in its book section the Arabic translation of Mein Kampf, by Adolf Hitler, a title available worldwide in major bookstores and online.

For one day, the book was included in the recommended section. The recommended tag was not an endorsement of the book's author or its content. In response to a customer, we removed the title from the display. Commentary in the public domain was also taken seriously by Virgin Megastore and our policy is always to listen and respond immediately.

This is a very offensive statement filled with provable lies.

It wasn't only one store, but at least two (and possibly three - a commenter here saw Mein Kampf featured in an airport bookshop in Saudi Arabia, but did not recall if it was a Virgin store.)

How on earth can they say "The recommended tag was not an endorsement of the book's author or its content"? That's what the word "recommended" means!

It was not only in the Recommended case for a single day. Here is a photo from a tweet on November 5: 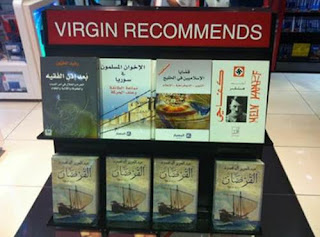 Here's the picture from the tweet I noted yesterday, dated November 23rd. Note that one of the "Recommended" books has changed in the meantime: 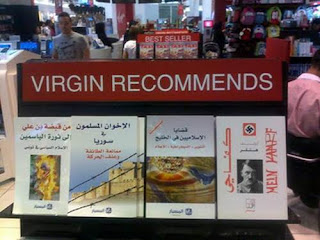 And while I don't know if it had been in the "Recommended" section earlier, someone complained about the book being sold at Gulf stores as long ago as April. (h/t Israellycool)

The Bahrain post I linked to was from a year ago.

In all those cases the customer complained, and it does not appear to have helped. I know I tweeted the company and received no response.

Virgin ME is trying to squirm out of this, without any hint that it is even aware that it did anything wrong.

UPDATE: The Middle East Virgin stores are owned by The Azadea Group, not Virgin itself, except for Morocco.

However, Virgin seems to consider itself the lead company anyway. From its website:

Once a Virgin company is up and running, several factors contribute to making it a success. The power of the Virgin name; Richard Branson's personal reputation; our unrivalled network of friends, contacts and partners; the Virgin management style; the way talent is empowered to flourish within the group. To some traditionalists, these may not seem hard headed enough. To them, the fact that Virgin has minimal management layers, no bureaucracy, a tiny board and no massive global HQ is an anathema. But it works for us! The proof of our success is real and tangible.

Our companies are part of a family rather than a hierarchy. They are empowered to run their own affairs, yet the companies help one another, and solutions to problems often come from within the Group somewhere. In a sense we are a commonwealth, with shared ideas, values, interests and goals.

If they take credit, they must also take responsibility. (h/t Silke)