Evaluation of, and submissions to The UN Independent Commission of Inquiry on the 2014 Gaza war

Two in particular stand out as far as Hamas using medical facilities for terror.

The report does not mention, even once, that Hamas - and Hamas' Al Qassam Brigades - used Shifa Hospital as a military headquarters, thereby endangering patients. The fact was confirmed by newspaper reports at the time, and one detailed report was removed by a French news site after Hamas threats:

After four blocked attempts to leave Gaza without explanation over weeks, the Palestinian journalist was summoned by the security services of Hamas on Sunday. "I received a call from a private number. They summoned me to Al-Shifa Hospital in the Gaza City center, " explains Radjaa. He carried with him his two phones, his press card and a small camera.

A few meters from the emergency room where the injured from bombings are constantly flowing, in the outpatient department, he was received in "a small section of the hospital used as administration" by a band of young fighters. They were all well dressed, which surprised Radjaa, "in civilian clothing with a gun under one's shirt and some had walkie-talkies " . He was ordered to empty his pockets, removing his shoes and his belt then was taken to a hospital room "which served that day as the command office of three people."

We even have a photo (that was also removed after Hamas threats:) 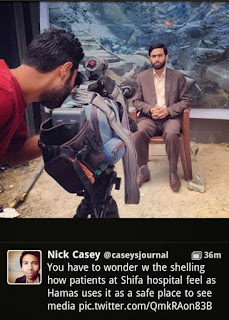 The footnote they used was from Israel, "The 2014 Gaza Conflict: Factual and Legal Aspects," but in fact the IDF released at least two videos showing Hamas terrorists using ambulances.

The same paragraph that UNHRC used to mention the "allegation" of Hamas using ambulances was the one that mentioned that they used Shifa Hospital as headquarters.

Which means that the Schabas/Davis report purposefully ignored a major violation of international law by Hamas that they were clearly aware of. Commandeering a hospital for military purposes is certainly more serious than using ambulances. Both of them are war crimes.

This is just one indication that the UNHRC report is just as biased as Goldstone was - but it worked harder to give the appearance of objectivity.