NDTV journalist: "How long do we self-censor because of fear" of Hamas?

The NDTV journalist who aired the video of a Hamas rocket being built and fired right next to his hotel room in Gaza has written about the episode, and it proves that most journalists in Gaza deliberately kept the truth from their audience.

Which sort of defeats the point of trusting journalists.

There is an important detail about that spot which I mention in our video report which may not have fully registered - this was the exact location from where a rocket was fired five days prior. It happened around midnight, so it was impossible to film. Panic ensued.The Israel Defence Force (IDF) sent a warning to two hotels across the road to evacuate; within minutes they were empty. Those in our building slept in a safe room on the ground floor. And so that spot was seared in our memory.

And not reported by any of the reporters who witnessed the rocket fire.

So when we saw the tent on the same location with two men (later three) moving in and out, working on something inside which they seemed to be burying into the ground, it wasn't hard to conclude what this was. When they started running wires out of the tent, the final steps before covering the earth with a spade, moving some shrubbery on top and then slinking away, it was even clearer.

We had all of it on tape, but wrestled with the dilemma of what to do with it. Two considerations weighed on our mind. One, the fear which hobbles the reporting such material: fear of reprisals from Hamas against us and those who worked with us, fear of inviting an Israeli response on the spot (these have been known to miss). Two, we needed to be 100 % sure that this was a rocket launch site. So we did nothing, setting off on our assignment for the day, mulling over the material in our possession.

The next morning was meant to be our last in Gaza, and the day when a 72-hour ceasefire was meant to bring some relief to the area. As we woke early to pack - stealing tense glances at the 'rocket' patch - the final step was enacted. With minutes left for the ceasefire to kick in, flurries of Hamas rockets were fired. At about 7:52 am, this patch of earth was activated; the rockets took off with a bang and a plume of smoke. We managed to catch it on video just seconds after. By then the men who assembled it had long gone.

We knew then we had to air the story. For us to have filmed how a rocket was assembled next to us, on a site used twice to launch a rocket, endangering the lives of all those around us on two occasions -to not have reported it would have been simply wrong. 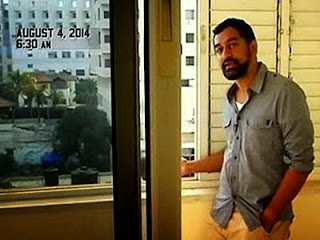 Meaning, every other journalist in the area was effectively a Hamas lackey.

But we did take precautions - we aired the report a good five hours after the rocket was launched, well into the ceasefire. By then it was clear that Israel was not responding, at least for the period of the ceasefire. (Incidentally, given Israel's extensive surveillance of rockets launched from the Gaza Strip it hardly seems they would need the media to point out to them where rockets are fired from.)

There was the question of possible reprisal by Hamas; to this one, there are no easy answers other than to ask: how long do we self-censor because of the fear of personal safety in return for not telling a story that exposes how those launching rockets are putting so many more lives at risk, while the rocket-makers themselves are at a safe distance? More so when we have rare, first hand proof of how it works?

NDTV is the exception that proves the rule: you could not trust any reporter in Gaza to be willing to report anything Hamas did not want them to report.

See also my previous posts on this topic.