Among the terrorists to be released, the murderer of a Holocaust survivor

Israel publishes list of first 26 convicted Palestinians to be freed out of 104, as gesture for peace talks; 17 had killed Israelis 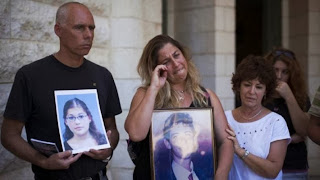 Relatives of Israelis killed in terror attacks holding signs as they demonstrate outside the Supreme Court in Jerusalem on August 11, 2013. (photo credit: Yonatan Sindel/Flash90)

The Israel Prisons Service publicized early Monday the list of the first 26 convicted terrorists who will be released as part of Israel’s confidence-building measures to help the restart of peace talks with the Palestinian Authority.

The list included 17 names of prisoners who had murdered Israelis, including Abu-Musa Salam Ali Atia of Fatah, who murdered Holocaust survivor Isaac Rotenberg in a Petah Tikvah construction site in 1994.

According to Almagor, an organization of terror victims’ families that has campaigned against the prisoner release, Rotenberg’s family perished in the Sobibor extermination camp during World War II. Rotenberg escaped and joined the partisans fighting the Nazis in the forests of Eastern Europe. He arrived in Israel in 1947, joined the IDF and fought in Israel’s Independence War on the Lebanese front.

A plasterer by trade, Rotenberg was attacked by Abu Musa and an accomplice at a construction site where all three men worked in March 1994. He sustained repeated blows to the neck with axes. His wounds induced a coma, and he died two days after the attack. He was survived by his brother and sister, who were also survivors of Sobibor, and by a wife and two children. Rotenberg was 67 when he died.

Rotenberg wasn’t the oldest victim of the prisoners who made it onto the list Sunday. Fatah member Ra’ai Ibrahim Salam Ali was jailed in 1994 for the murder of 79-year-old Moris Eisenstatt. Eisenstatt was killed with ax blows to the head while he sat on a public Kfar Saba bench reading a book.

Another prisoner, Salah Ibrahim Ahmad Mugdad, also of Fatah, was imprisoned in 1993 for killing 72-year-old Sirens Hotel security guard Israel Tenenbaum by beating him in the head with a steel rod.

According to Almagor, the Poland-born Tenenbaum had immigrated to Israel in 1957, at age 36, and settled in Moshav Ein Vered. He was an agricultural worker on the moshav, but was working as a night watchman at the hotel in 1993. Tenenbaum was 72 at the time of his death. He was survived by a wife, two children and four grandchildren.

Two of the prisoners, Abu Satta Ahmad Sa’id Aladdin and Abu Sita Talab Mahmad Ayman, were imprisoned in 1994 for the murder of David Dadi and Haim Weizman. After killing Dadi and Weizman as they slept in Weizman’s apartment, the attackers cut off their ears as proof of the killing.

Abdel Aal Sa’id Ouda Yusef was imprisoned in 1994 to a 22-year sentence for several grenade attacks, and for his part as an accomplice in the murder of Ian Sean Feinberg and the murder of Sami Ramadan.

Feinberg, a 30-year-old father of three, was a proponent of Palestinian economic development. He was killed by gunmen who stormed a business meeting in Gaza City which he attended in April 1993.

Also on the list was Kour Matwah Hamad Faiz of Fatah, imprisoned in 1985 after he was convicted of killing Menahem Dadon and Salomon Abukasis in 1983 and planning to murder then-prime minister Yitzhak Shamir.

Another two prisoners to be released, Fatah members Sualha Fazah Ahmed Husseini and Sualha Bad Almajed Mahmed Mahmed, were imprisoned for a stabbing attack on a crowded Ramat Gan bus, on the 66 line, in 1990. The two, together with a third accomplice, stabbed wildly at passengers, killing 24-year-old Baruch Heizler and wounding three young women. Heizler was named after his grandfather, who was killed during the Jordanian bombardment of the Jewish neighborhoods of Jerusalem during the 1948 Independence War.

Sha’at Azat Shaban Ata was imprisoned in 1993 for helping to orchestrate the murder of 51-year-old Simcha Levi, a woman who made her living transporting Palestinian day laborers to work in Jewish settlements in the Gaza Strip. In March 1993, three of the women laborers were disguised male attackers, who beat and stabbed her to death.

Maslah Abdullah Salama Salma, a Hamas member likely to be sent to the Gaza Strip after his release, was imprisoned in 1993 for the brutal murder of Petah Tikvah convenience store owner Reuven David. Abdallah, together with an accomplice, entered David’s convenience store on May 20, 1991, bound David’s arms and legs and beat him to death, before locking the store and fleeing the scene. Born in Iraq in 1932, David was 59 at the time of his death, and was survived by a wife, three children and multiple grandchildren.

The remaining prisoners, in the order listed by the Prisons Service:

A special ministerial panel on Sunday approved the release of the prisoners. “In the wake of the government’s decision to renew diplomatic negotiations between Israel and the Palestinians and to authorize a ministerial panel for prisoner releases for the duration of the negotiations, the ministerial panel met this evening,” read a statement by the Prime Minister’s Office released after 11 p.m. Sunday.

The panel approved the release of the first 26 Palestinians out of an expected 104 prisoners. The identities of the prisoners were made public on the Israel Prisons Service website, www.ips.gov.il, at 1 a.m.

The names and I.D. numbers of the prisoners were listed alongside the names of their victims. (Link is in Hebrew)

The Prisons Service also published overnight Sunday the phone number of the Pardons Department in the Justice Ministry, where, it said, the public “can obtain information on the prisoners and their release procedures.” The number was 02-646-6801/3/4, and would be operational from 8 a.m. to 6 p.m. starting Monday morning and until the release date of the prisoners, which could be as early as Tuesday.

Besides Ya’alon, Livni and Peri, Public Security Minister Yitzhak Aharonovitch and Prime Minister Benjamin Netanyahu are also panel members. The prime minister was recovering Sunday from a hernia operation that saw him hospitalized the previous night. Aharonovitch is on an official trip to Russia.

The panel is empowered to decide, based on criteria established by the Shin Bet, which prisoners on the list of 104 will go free at what stage, determine whether they will be allowed to return to their homes or be sent abroad, and oversee the implementation.

The panel announced it had made the decision Sunday night, but said it would wait before publicizing the identities of those who would be released until officials had the chance to notify the families of terror victims who asked to be notified before a public announcement.

Initially, the PMO would only say that 14 of the prisoners “will be transferred to Gaza” and 12 “were from Judea and Samaria [the West Bank].” Eight of the prisoners were slated to be released over the next three years, having served out their sentences. Two were already slated for release in the next six months.

“The release will take place at least 48 hours after publication of the list,” the PMO statement said. “In the discussion [of the panel on Sunday], it was emphasized that if any of the released [prisoners] returns to hostile activities against the State of Israel, he will be returned to complete his prison term,” it added.

Negotiations between Israel and the Palestinian Authority were restarted two weeks ago in Washington, after over three years without direct talks, and will continue Wednesday in Jerusalem. Negotiators are set to meet again a week later in the West Bank town of Jericho. The sides haveagreed to a nine month timeline in an attempt to reach an agreement and end the conflict.

Palestinian Authority President Mahmoud Abbas said on Sunday that no freed Palestinian prisoners will be deported, despite claims by Israel that it will demand that some be sent to Gaza or neighboring Arab countries.

Abbas added that Israeli-Arabs and Jerusalem residents would be among the 104 prisoners released by Israel in the near future.

Abbas’s statements came hours after his meeting with US mediator Martin Indyk in Ramallah earlier Sunday, two weeks after negotiations restarted in Washington and only days before the next round of talks is set to take place in Jericho on Wednesday.

Earlier on Sunday, families of victims killed by terrorists held in Israeli jails petitioned Israel’s High Court of Justice in an attempt to prevent the release of the prisoners.

During the session, headed by High Court President Asher Grunis, the mother of Lior Tobol, who was stabbed to death in a terror attack in Jerusalem, heckled the judges and called on them to heed objections against the prisoner deal.

“These murderers are about to be released and so they can give the ‘V’ for victory sign and you don’t even want to hear from us,” Miriam Tobol cried out. “They stabbed my son 24 times. You are supposed to let people like that rot in prison and not let them go free.”

Gila Molcho, whose brother Ian Feinberg was killed in Gaza in 1993, took part in a protest outside the court by the families of terror victims and argued that even using the term “prisoners” is inappropriate.

“We are setting free terrorists,” she said. “My brother was a lawyer, a man of justice, and we also deserve justice.”

Supreme Court Justice Elyakim Rubenstein questioned the appropriateness of debating the matter of prisoner releases in court rather than in the political arena.

“We sympathize with your pain but this is the legal system that we are talking about and these are questions that should be directed at the politicians and diplomats,” Army Radio quoted him as saying.