Some of his mates were slightly more forthcoming. “We came today to identify with them,” said Dr. Yitzhak Yifat, a gynecologist from Kiryat Malachi who was immortalized in David Rubinger’s iconic photo as the young, fresh-faced lad in the middle, gazing up at the Western Wall on that June day 46 years ago. “The Kotel belongs to everyone and not just one segment of the population.”

Paratroopers of ’67 protect Women of the Wall ’13

Four veterans of the battle for Jerusalem ensured a monthly female prayer service, complete with prayer shawls, went ahead undisturbed at the Western Wall for the first time in 24 years. Then the former fighters departed, and the women were arrested 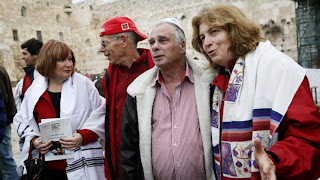 Lesley Sachs, 54, from Jerusalem, a participant in the Women of the Wall’s monthly prayers for the past five years and currently the group’s executive director, stood up on the bus on the way to the Old City on Monday morning, raised her red sweater and tucked away her folded prayer shawl against her abdomen. “I very much don’t like doing this,” she said. “I feel it is disrespectful to the tallit. But otherwise it will be confiscated.”

Men and women pray separately at Judaism’s holiest site. Women are not allowed to wear prayer shawls or phylacteries or to read from the Torah. Any religious ceremony “not in accordance with the custom of the holy site and which offends the sensitivities of the worshipers at the place,” according to the language of the law, can incur up to six months in jail or a monetary fine.

Recently police have taken to confiscating prayer shawls from women at the security checkpoints at the entrance to the Western Wall Plaza. “I’d keep it in my bag,” said Sachs, pointing to her multi-use tote from a boutique Jerusalem bakery, “but sometimes they look through it as though I were smuggling weapons.”

Monday’s service, though, on the first of the month of Adar, was markedly different from services over the past 24 years: The women were allowed to pray with prayer shawls and were arrested only after the service. And much of the difference can be attributed to the presence of four veterans, all members of the 55th Paratroop Brigade, who fought their way into the Old City of Jerusalem on June 7, 1967, and are known locally as “the liberators” of the Old City.

“These alter kockers, with their presence, put an end to something absurd,” said Women of the Wall Chairperson Anat Hoffman before the arrests. “The Israeli feminists,” she went on to say, “received help today from the heart of the patriarchy.”

One of the quartet, in a soft blue sweater and a windbreaker, shook his head at the sign adorning the entrance to the Dung Gate early on Monday morning. “This country is completely insane,” said Micha Eshet, the 66th brigade’s operations officer during the Six Day War, as he pointed to the gender-separate lines for the security check.

Women who smuggled their prayer shawls in under their clothes or gave their religious items to men, some of whom had to assure the security officers that the rainbow-colored shawls were indeed their own, made it into the plaza with all of their belongings. Others had their prayers shawls confiscated.

“I think Rabinowitz is going to do everything he can to make sure it will be quiet today,” said Eshet of Rabbi Shmuel Rabinowitz, who presides over the Western Wall.

His prediction was only partially correct.

Striding toward the area that overlooks the women’s section, Eshet noted that the rabbi of the Western Wall has refused to place a plaque within the plaza to commemorate the battle for Jerusalem. “That’s also going to change,” Eshet vowed.

The women’s campaign to be allowed to hold a prayer service at the Kotel began in December 1988. Since then they have been castigated and assaulted by ultra-Orthodox worshipers. They have been caught in the crossfire of teargas. They have been arrested. They have been to the highest court in the land. They have testified before government commissions. And, though their struggle has featured prominently in international news media and commanded attention throughout the Jewish world, it has suffered, in Israel, from a striking indifference.

“That’s changing,” said Rabbi Gilad Kariv, a Reform rabbi and Labor Party member, who participated in Monday’s service from the other side of gender barrier. “People understand that what happens here will dramatically influence what happens in this country in terms of civil marriage and burial.”

He called the women’s struggle a societal “weaning from the false consciousness that Judaism equals Orthodoxy.” 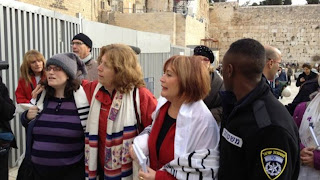 Sachs, Hoffman and Nevo (from right to left), being led to the police station (Photo credit: Mitch Ginsburg/ Times of Israel)

The Paratroopers were far less verbal. In fact, even though it was they who drew much of the Israeli media to the event, it was hard to get them to talk. One of the four, in sandals and a baseball cap and using a cane, who only gave his name as Uri and confided that he was “in the hospital” by the time his battalion had reached the Temple Mount, said, “Whoever wants to pray should be able to pray,” and turned his eyes away.

Asked if he had considered the notion of religious freedom back in 1967, he said: “No. We had other things to take care of. Like widows and wounded and dead.”

Some of his mates were slightly more forthcoming. “We came today to identify with them,” said Dr. Yitzhak Yifat, a gynecologist from Kiryat Malachi who was immortalized in David Rubinger’s iconic photo as the young, fresh-faced lad in the middle, gazing up at the Western Wall on that June day 46 years ago. “The Kotel belongs to everyone and not just one segment of the population.”

Yifat, in a satin white yarmulke and a leather bombardier jacket, stood above the prayer service and hung a small Paratrooper flag from the metal partition. “It would be going a little far to compare this to the battle we fought. I hope no one is going to get killed here,” he said.

His former commander, Eshet, cut in and said, “In the end there will be a civilian uprising.”

As he spoke, the women bounded back up the ramp, their prayer service completed. “This is the first time in 24 years that we have been allowed to pray like human beings,” said Hoffman.

Embracing one of the paratroopers, she quoted their late brigade commander, Motta Gur, and said “The Temple Mount is in our hands.”

Seconds later, just after the paratroopers had left and after she had quoted the Psalm, “This is the day which the Lord hath made; we will rejoice and be glad in it,” the police arrested Lior Nevo, an eighth-months-pregnant rabbinical student at the Hebrew Union College as she conducted an interview, still clad in her prayer shawl.

Hoffman and Sachs submitted themselves for arrest as well and, as the police cordially led them and seven others through the Old City alleys, the rest of the women congregated outside the Kishleh police station, on a stretch of sidewalk near Jaffa Gate, and read from the Torah.

“We read here,” said Naama Peled, a young member of the organization, “so that the women inside can hear us.”