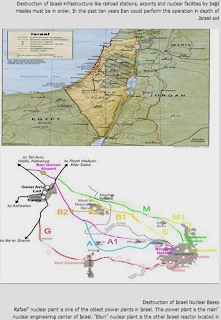 'Iran can destroy Israel in 9 minutes'

Iranian blogger urges Tehran to exploit West's inaction to 'wipe out Israel' by 2014; lays out strategy

An Iranian blogger on Saturday urged Tehran not to delay an attack on Israel, claiming that the Islamic Republic could destroy the Jewish state in "less than nine minutes."

Alireza Forghani, a computer engineer, wrote in his essay that Tehran should exploit the West's dawdling over a strike on Iran to "wipe out Israel" by 2014 – that is, before President Mahmoud Ahmadinejad's term runs out. The post was widely covered in the Iranian media on Saturday.

Forghani lays out the religious justifications for the attack and presents strategies for an offensive that would target key Israeli sites using land-to-land missiles.

The first step in the strategy, Forghani suggested, should be to launch ballistic Sijil missiles on Tel Aviv, Jerusalem and Haifa, as well as power stations and other energy sources, sewage facilities, airports, nuclear plants, media hubs and transportation infrastructure. In the second step, Shahab 3 and Ghader missiles should target the rest of the country's population centers. Total annihilation, he asserts, could be achieved within nine minutes.

Forghani posited that targeting civilians could be justified with revolutionary leader Ayatollah Ruhollah Khomeini's ruling that Muslims must wage a Jihad against an enemy who attacks an Islamic nation.

"So since Israel has attacked Palestine and occupied this part of the Islamic Entity, defending the oppressed Palestinian Muslims is compulsory," Forghani wrote.

The blogger appears to quote Ynet security analyst Ron Ben-Yishai as saying that there is no spot in Israel that is not vulnerable to an Iranian missile attack, although Yishai referred in his column to the capabilities of Syria, Hamas and Hezbollah, not the Islamic Republic.

Forghani, who describes himself as an enthusiastic supporter of the Iranian government and a former member of the Revolutionary Guard's Basij militia, stressed that the opinions presented in his post are his own and do not represent the regime's position.

Dr. Raz Zimt, a research fellow at the Institute for Iranian Studies at Tel Aviv University, claimed that the stir that the post caused in the Iranian media might indicate the dawn of public discourse about a preemptive strike on Israel. The article might also signify the effect that the global discussion about a possible military operation in Iran has on the Islamic Republic.

The post was released on the same day that Iran's Revolutionary Guard began naval maneuvers in the latest show of force near the strategic Strait of Hormuz, the critical Gulf oil tanker route that Tehran has threatened to close in retaliation for tougher Western sanctions.

Plans for new Iranian war games in the Gulf have been in the works for weeks. But they got under way following stern warnings by Iran's Supreme Leader, Ayatollah Ali Khamenei, about any possible US or Israeli attacks against Tehran's nuclear facilities.

"The Zionist regime is a cancerous tumor and it will be removed," he said Friday.