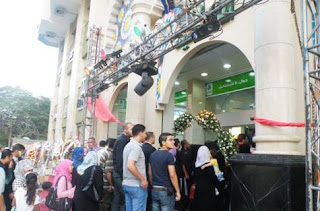 Gaza: The biggest mall in the Gaza Strip opened its doors on Tuesday with several hundreds of residents thronging the complex.

The inaugural celebrations of the Al Andalusia Mall were as big as the mall itself, which houses branded clothes, cosmetics, office supplies, toys, shoes and appliances, etc.

Despite the reasonable prices, not many were interested in buying goods due to the financial crisis facing the impoverished strip. Most residents are poor and added to that the government staff were paid only half their June salary due to financial crisis.

The residents were more excited over the size of the mall and the escalators rather than shopping.

Mahmoud Ebed, a governmental employee, said: "I was curious to see the mall but I will not buy anything from here today."

"The prices are reasonable but I still didn’t receive the other half of my June salary," Mahmoud added.

Many residents still prefer to go to the public market.

Wael Al Whedi, an engineer working in a non-governmental organisation, was one of the few who actually made a purchase on the opening day.

Al Whedi said: "In general, the prices are reasonable for the middle class but most of the people in Gaza still don’t have the culture of buying from a mall."

Dr Alaa Al Deen Al Rafati, economy minister in Gaza government, said: "Projects like this are important for the economy as Gaza is not an industrial economy."

Ihab Al Isawia, a mall investor, said: "The mall is built on a 3,000-square meter land and has 14 departments providing goods and services."

The mall even has a swimming pool and a small cinema theatre.