UNRWA suspends Gaza reconstruction for lack of funds. Here's why there's no money. 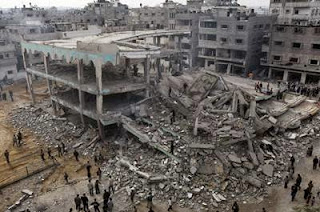 The UN agency for Palestinian refugees said on Tuesday that it cannot afford to repair Gaza homes damaged in last year's war with Israel because donors have failed to pay.
"The agency has exhausted all funding to support repairs and rental subsidies," the United Nations Relief and Works Agency (UNRWA) said in a statement.
"$5.4 billion was pledged at the Cairo (aid) conference last October and virtually none of it has reached Gaza. This is distressing and unacceptable.
"It is unclear why this funding has not been forthcoming," it added.

Actually, it is quite clear. The reason was said explicitly by Egypt's foreign minister Sameh Shoukry last month:

Commenting on a Gaza donors conference held in Cairo months ago, Shoukry said donors who pledged billions of dollars for the embattled Palestinian territory had not sent the money because they had no trust in the absence of a lasting solution to the Palestinian-Israeli conflict and the suspension of direct Palestinian-Israeli peace negotiations.
"The international community links its financial contribution to the reconstruction of Gaza to the return of the Palestinian authority to its position in it," Shoukry said.
He added that this international community had confidence in the Palestinian Authority and a desire to contribute to the reconstruction of Gaza through the authority.

Hamas refuses to relinquish its hold on Gaza even after it supposedly joined the "unity government" and international donors don't want to contribute to Hamas. Arab countries don't trust Hamas and neither do Western countries.

There is one other reason: Arab countries always lie about how much they support their Palestinian brothers.

There is a long history of Arab countries pledging hundreds of millions of dollars and not paying. In 2008, it was revealed that Arab nations had paid only 40% of the money they had pledged to the PA. In 2012, Arab nations again promised hundreds of millions that they didn't pay. And in 2010, not one dime of a half billion dollars pledged specifically for Jerusalem was paid. You know, the city that is supposedly the one that Arabs would die for couldn't even get anything.

While Arab nations will insist to the West how the Palestinian issue is their top priority, their actions have consistently shown this to be a lie. They just say it in order to put political pressure on Israel via the West, but they really don't give a damn about Palestinian Arabs. (Anyone who has ever followed how they treat their Palestinian Arab "guests" in their countries know this to be the case.)

But the hypocrisy is rarely discussed in the West, because their foreign ministers and prime ministers always make grandiose speeches in "support" of people that they just wish would go away already. It just so happens they hate Jews even more.

The UNDP also stated last week that it had only received 5% of the funds pledged for reconstructing Gaza.

The cement is available. The trucks to deliver them are ready. But the vast majority of the media coverage (prompted by Mahmoud Abbas' gang and many anti-Israel NGOs) blames Israel for Gaza reconstruction delays.

Oh, and UNRWA is making a subtle threat:

[Serry added,] "People are desperate and the international community cannot even provide the bare minimum – for example a repaired home in winter –let alone a lifting of the blockade, access to markets or freedom of movement. We’ve said before quiet for quiet will not last, and now the quiet is at risk.”

Meaning that UNRWA knows that Gazans are not being told that their Arab brethren aren't paying up. They are being told that it is Israel's fault, so they will want to start resuming rocket fire at Israel.

UNRWA is telling the world that irrational Gazans might start another war against the nation that is not standing in the way for their legitimate reconstruction needs. And that is to be expected. Certainly UNRWA isn't going to tell Gazans the truth. They will continue to teach hate against Israel in the schools so as to give their "refugees" a convenient target for hate.

As is so often the case in the Middle East, everyone is afraid of the truth, and everyone - world media, Western diplomats, Arab leaders, UN agencies, and Palestinian Arab leaders themselves - spin a web of lies in order to keep Israel in the crosshairs in the name of Palestinian solidarity. No one is willing to stand up and say that Palestinian leadership has been corrupt, that Hamas has been a disaster for Gaza, that Arab nations are sick and tired of them whining. Deep down, everyone sees through PLO stunts meant to pressure Israel and pretending that the Palestinian issue is more important than Syria and ISIS and Libya and Yemen the the Iranian threat. But they aren't willing to say it out loud.