Mesalmeh told police he was inspired to carry out the attack after a Palestinian rammed his car into a group of pedestrians in Jerusalem earlier the same day, killing two people.

He claimed he was also angered by images from Israel’s bloody summer war in Gaza, police said.

Hamas member admits to running over soldiers in Nov. 5 attack

Palestinian behind wheel of van that rammed into three soldiers in West Bank says he was inspired by earlier car attack, planned more assaults, police say

BY MARISSA NEWMAN AND TIMES OF ISRAEL STAFF 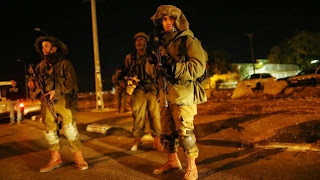 IDF soldiers seen blocking the area where three soldiers were injured when a Palestinian driver rammed into a bus stop near the West Bank village of Al-Aroub close to the Gush Etzion Junction, south of Jerusalem, November 05, 2014. (Nati Shohat/Flash90)

·         A Palestinian man confessed to running over soldiers in the West Bank earlier in the month in a planned attack, police said Thursday.

Earlier in the day, security officials confirmed that the November 5 hit-and-run, in which three Israeli soldiers were struck by a van driven by a Palestinian, was in fact a terror attack and not a car accident.

The terrorist behind the attack was named as Hamam Mesalmeh, a 23-year-old Hamas operative from Beit Awwa, southwest of Hebron in the West Bank.

“During interrogation by the Shin Bet (security service), he confessed to running down the soldiers as part of a planned attack,” a police statement said.

He was expected to be charged “within the next few days.”

Mesalmeh told police he was inspired to carry out the attack after a Palestinian rammed his car into a group of pedestrians in Jerusalem earlier the same day, killing two people.

He claimed he was also angered by images from Israel’s bloody summer war in Gaza, police said.

Mesalmeh reenacted the attack, which took place along a stretch of Route 60 near the Al-Aroub refugee camp, for investigators, and said he had been planning more attacks as well, according to police.

The army earlier informed the families of the three soldiers who were injured in the November 5 van attack in the Etzion Bloc region of the West Bank, south of Jerusalem, that the incident was nationalistically motivated, after wrapping up a two-week investigation into the incident, Channel 2 reported.

A day after the attack, a senior security official said the attack may have been a car accident, according to Israeli media reports.

Mesalmeh turned himself in to Israeli authorities on November 6, ending a manhunt following the incident.

He told officials that he lost control of the large commercial vehicle he was driving, and panicked when he realized he had hit Israeli soldiers and fled the scene.

The parents of the three wounded soldiers maintained all along, based on the footage of the incident, that it was a deliberate attack. On November 9, Roni Aharoni said that his son, Moshe Aharoni, who was seriously injured in the hit-and-run, told him that the driver of the commercial van had accelerated as he barreled into the soldiers. 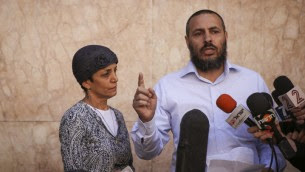 The parents of injured IDF soldier Moshe Aharoni speak to the media outside the Hadassah Ein Kerem hospital emergency unit where Moshe was hospitalized, on November 9, 2014. (photo credit: Hadas Parush/Flash90)

One soldier was seriously injured and two moderately hurt in the incident, which took place just after 10 p.m.

The crash came hours after a terror attack in which an East Jerusalem resident and Hamas member rammed his vehicle into a crowd of pedestrians in Jerusalem, killing a Border Police guard. The killer, Ibrahim al-Akary, was shot dead by police after getting out of his van and attacking people with a metal rod.

Yeshiva student Shalom Ba’adani, 17, was critically hurt in that attack and succumbed to his wounds several days later.

A police spokesman had said on the night of the attack that officials were treating the incident as a possible terrorist attack.

IDF troops launched a full-scale search following the incident, arresting the driver’s father, brother, and 15 other Palestinians in raids across the West Bank before Mesalmeh turned himself in.

AFP, Tamar Pileggi and Stuart Winer contributed to this report.