The real lesson of Amira Hass' ejection from a Palestinian university

How Palestinian universities like Bir Zeit are intellectually straitjacketing their students. 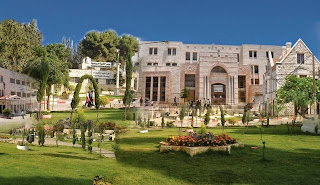 I’m not an Israeli, so even though I’ve been reporting on Birzeit University near Ramallah for more than 15 years, I didn’t know until my colleague Amira Hass was asked to leave the campus last week that the university operates a ban on Israelis.

Well, not all Israelis, as Amira explains. Just “Jewish Israelis.”

The ban probably makes sense to most Palestinians, but it’s a disgrace and should be repealed.

The Rosa Luxemburg Foundation, which organized the conference from which Amira was ejected, denounced her expulsion as “discrimination” and expressed its solidarity with her. In a statement, the university said it had “no objection to the presence of the reporter Hass” but felt justified “as a national institution to distinguish between friends of the Palestinian people and its enemies.”

On Tuesday, the university issued a tougher statement, regretting the “lamentable incident” excluding Amira and clarifying that it welcomes “supporters of the Palestinian struggle and opponents of the Israeli occupation of Palestine, regardless of nationality, religion, ethnicity, or creed. Hence, Hass, who has consistently condemned the Israeli occupation, evinced support for Palestinian rights, and helped expose the discriminatory policies of occupation and its flagrant violations of these rights, is always welcome on our campus.”

So not all Jewish Israelis, then. Not the good ones.

The ban is not just immoral and racist, it’s symptomatic of the crushing failure of the Palestinian higher education system to fulfill its role as the engine powering the Palestinian future because of its stifling obsession with the Palestinian past.

I've reported from Bir Zeit dozens of times for The Chronicle of Higher Education and other media. I've reported the random arrests and administrative detention of their students and lecturers, often in the middle on the night, by the IDF. I’ve reported how many of those students and lecturers have been held for months, even years, without a fair trial, sometimes without even being told the crimes of which they are suspected.

In 2009, for example, there were 83 Birzeit students incarcerated in Israeli jails, of whom 39 were convicted of various terror-related charges, 32 were awaiting trial, nine were in “administrative detention” and three were undergoing interrogation following their arrest. Birzeit accounts for more than half of all the 1,000 Palestinian students arrested by Israel since the start of the Second Intifada in 2000, including at least three of its student council heads who were arrested and held for months on end.

Clearly, some of these students were also engaged in dangerous terrorist activity, but the majority appears to have been innocent of any real crime.

Nor is Birzeit alone in feeling the crushing weight of Israel’s occupation interfering daily with its studies and students. Just about every Palestinian university in the West Bank has stories of nighttime IDF raids, campus teargas attacks and random arrests and intimidation.

So I am well aware of the pressures that distinguish university life at Birzeit from Berkeley or Brooklyn College.

But much of the trouble there has little to do with Israel or the occupation. I have also reported the political intimidation and violence doled out by some Birzeit students to their political opponents. I met the Islamist student who led the stone-throwing rioters who injured the visiting French Prime Minister Lionel Jospin and chased him off campus in February 2000. The British Consul-General Sir Vincent Feane had to beat a similar retreat in 2013.

In 2007, university classes were suspended and students evacuated from the campus after Ahmad Jarrar, a student supporter of the ruling Fatah party, was assaulted in his dormitory room, apparently by four men from the Marxist PFLP. Jarrar was treated at a hospital for severe injuries suffered as he was apparently being tortured. The assailants used charcoal to burn Jarrar’s face and hammered nails into his feet. Fatah gunmen arrived soon after, threatening to kill PFLP supporters.

Earlier this year, I broke the story of a Palestinian student trip to Auschwitz organized by a professor at Al-Quds University who has since resigned over the fallout it caused. Two Birzeit students were due to go on that trip. They pulled out at the last moment after heavy pressure from the university.

This obsession with politics, although understandable, does a considerable disservice to the students who rely on Birzeit and the other Palestinian universities to help them create a better future for themselves – and for the Palestinian people.

Birzeit, ironically, was actually founded by the Israelis. The dictatorial Jordanian regime would never sanction an independent university in the West Bank. It soon became the intellectual powerhouse of Palestinian resistance against the Israeli occupation.

But it has failed to mature into a new, post-revolutionary role and become the engine of emerging Palestinian statehood.

One small example illustrates the problem. Despite enormous efforts by international companies, Arab entrepreneurs and a small number of Israeli and Jewish investors, the Palestinians are failing to produce a viable high-tech sector. While thousands of Israeli twenty-somethings are developing world-class technology with little more than a Wi-Fi connection and a laptop, their Palestinian counterparts have precious little to show. Apologists argue that it’s because of Israel’s refusal to allow a Palestinian 3G network, but that’s not true. Sure, the lack of 3G is another disgrace, which should be fixed, but it affects domestic consumers, not developers. Tech development uses Wi-Fi, not 3G, and is aimed at the international market, not the local one.

The main reason for the under-development of Palestinian high-tech is the poor education on offer from universities like Birzeit. One of the few successful tech start-ups in Ramallah was founded by an East Jerusalem Palestinian who studied at a Hebrew-speaking Israeli school and then at an Israeli university. His business is expanding fast, but he cannot find enough skilled Palestinian graduates to hire.

It’s a complaint I hear repeatedly when I’m reporting on Palestinian graduates. High grades in exams are achieved by parroting the lecturers’ ideas, not by challenging them. The universities are simply not teaching their students the independent critical thinking skills needed in today’s world. Their educational system is mired in the past.

If Birzeit and the other Palestinian universities spent less effort intellectually straitjacketing their students, and more time teaching them how to think critically and independently, the Palestinian future would look a lot brighter.