A mere 16 out of 23 trains remain operational due to repeated rock attacks, leading to lessened frequency of transport for the capital.

Share on facebookShare on twitterShare on emailShare on printMore Sharing Services15 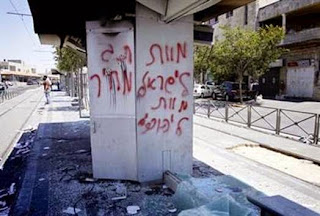 The constant terrorism of rock throwing in Arab neighborhoods of Jerusalem is becoming an increasing threat, not only for Jews who happen to pass near such neighborhoods but for residents of all parts of the capital city.

CityPass, the company operating Jerusalem's light rail system, announced Sunday morning that "due to continued and repeated rock throwing that inflicts damage to the trains, this morning we only have 16 operable trains out of a total of 23."

"What that means is that fewer than needed trains are active on the line, and the frequency (of trains) throughout the line will be harmed," added CityPass, noting on the long-term effects of the rock terror that has decommissioned nearly half of the trains.

CityPass has been complaining for a while that their train cars have been turned into a target for Arab terrorism, a fact which prevents smooth transportation service to residents of the capital.

The rock terror, which has often targeted Jewish children, has prevented residents of the northern neighborhood of Pisgat Ze'ev from using the light rail for several weeks, given that the rail passes from there through Beit Hanina and Shuafat, areas of heavy rock attacks.

In early July as Arab riots flared in Jerusalem over the death of an Arab teen, who was killed by a mentally ill man after the murder of three Jewish teens by Hamas terrorists on June 12, violent Arab rioters destroyed three light rail stations, inflicting enormous financial damage to the system.

The light rail was restarted for service in the area later in July, skipping stops in the Beit Hanina and Shuafat areas, but as noted residents of Pisgat Ze'ev remain unable to take the trains due to attacks on them in the area.

After a young father was critically wounded by a rock attack in Judea while driving with his wife and baby daughter last month, Har Hevron Regional Council head Yohai Dimri told Arutz Sheva "this isn't the first time that it's been proven rocks are just as dangerous as gunfire or a rocket."