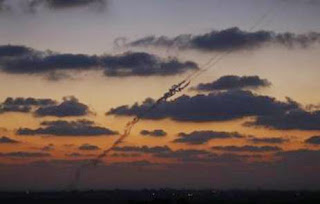 A smoke trail is seen as a rocket is launched from the northern Gaza Strip towards Israel July 16, 2014. Photo: REUTERS

Hours after rockets shattered the cease-fire and hit Gaza frontier communities, three loud explosions were heard over Tel Aviv, shortly before 11 p.m., for the first time in over a week.

In total, the IDF said that 50 rockets were fired at Israel since 4:00 p.m. on Tuesday until around midnight. Six rockets were intercepted by the Iron Dome rocket defense system.

Hamas claimed responsibility for the rocket attacks. It also said it launched a J-80 rocket at the Ben Gurion Airport, though there were no reported strikes near the airport.

Rocket alert sirens were heard in Jerusalem, Beit Shemesh, Beersheba, Ashdod, Ashkelon, and in other communities.

The IDF confirmed that a rocket fell in an open area of Jerusalem.

One explosion in open territory in the greater Tel Aviv area was so far confirmed. Two rockets exploded in open areas of Sha'ar HaNegev. A rocket directed at the Ashkelon Coast Regional Council shortly before the latest salvo of rockets landed near a shopping center in the area. No injuries were reported but damage was caused to a building.

Across the border, in Gaza, Palestinians reported a mounting number of injuries, following resumed air strikes on the Strip. Palestinian medical sources said three people were killed, including a three-year-old child, and 16 wounded, when an Israeli air strike hit a home in the Sheik Radwan neighborhood, north of Gaza City.

The officials said ten other Palestinians were injured near a mosque in the same neighborhood.

The IDF confirmed that Israel launched at least 30 air attacks over the past few hours.

The Home Front Command has instructed all cities within 80 kilometers of the Gaza Strip to open public bomb shelters.

Mayors in Rishon Lezion, Rehovot, Bat Yam and Ramat Gan have all issued orders to open their cities' shelters, out of fear that Gaza rocket fire would begin anew in the Gush Dan area.

Three rockets fell in open areas near the Negev city in the afternoon; no air raid sirens were activated in the attack. Soon afterwards, IAF jets commenced air strikes on a series of terrorist targets across the Gaza Strip.

Hamas spokesman Husam Badran accused Israel of sabotaging the talks, saying that Israel was placing obstacles on every issue. "If we don't reach an agreement that serves the interests of the Palestinians, all options are open." Senior Hamas official Izzat a-Rishek, a member of the Palestinian delegation to Cairo, said that "our people's struggle will not stop with this truce or any other. The struggle will continue until we achieve the goals of the people and fulfill the dream of elections and national independence." Israeli diplomatic sources said that in light of the rockets fired on the South and the violation of the cease-fire, Prime Minister Binyamin Netanyahu and Defense Minister Moshe Ya'alon instructed the IDF to resume its attacks on terror targets inside the Gaza Strip.The attacks came despite a temporary cease-fire between Israel and Hamas that was extended on Monday night and was not scheduled to expire until midnight.

The IDF said that it responded to the rockets with strikes on Gaza and was prepared for the possibility of renewed hostilities.

According to Palestinian sources, Israeli air raids hit an agricultural field in Beit Lahiya, areas in eastern Rafah and the town of Deir al-Balah.

Israel called back its delegation to Cairo in light of the violation of the cease-fire.

Economy Minister Naftali Bennett said in response to the renewed fire that "when you negotiate with terrorists, you get more terror." He slammed Hamas for launching rocket attacks during negotiations and called for a harsh response that will put an end to the deteriorating situation: "Sooner or later, Israel will have to defeat Hamas. There is no way around it." Construction and Housing Minister Uri Ariel said he backed the prime minister and the political leadership in "dealing a heavy blow to [Hamas] terrorists" and reinstating the sense of security to Israel.

Earlier in Cairo the chief Palestinian delegate to the indirect negotiations with Israel cautioned that violence could erupt anew if the talks failed.

"We hope that every minute of the coming 24 hours will be used to reach an agreement, and if not (successful), the circle of violence will continue," head of the Palestinian delegation to the talks Azzam al-Ahmad said.