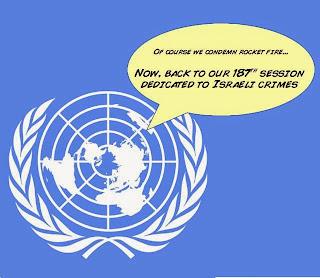 From the Simon Wiesenthal Center:

At yesterday's meeting at the United Nations, senior officials of the Simon Wiesenthal Center presented United Nations Secretary-General Ban Ki-moon a document (read letter and document here) expressing concerns about Hamas' campaign of terror against Israel, and a review of the terrorist group's multiple violations of International Law, including the willful use of Gaza civilians as human shields resulting in massive casualties and the destruction of homes, schools, hospitals and even UN facilities.

Despite these violations by Hamas, the officials said that Israel still receives the brunt of international condemnation even from within the UN community, contributing to an alarming increase of anti-Semitism and hatred of Israel throughout the world.

The document that they attached looked mighty familiar...

It was copied from my list of 19 ways Hamas has violated international law.

While I would have preferred that they checked with a real international law scholar first, I'm reasonably confident that everything mentioned is accurate.

Plus, there is no downside. The UN cannot exactly respond by saying that "Oh, Hamas is only violating 14 of the 19 laws you are mentioning!"

The fact is that the UN and every major NGO will only condemn Hamas rocket attacks, and none of their other violations of international law. That way they pretend to be "even-handed" when they are really looking for an excuse to spend 99% of their time bashing Israel, which isn't violating international law!

1. Hamas' rocket attacks directed at Israel's civilian population centers deliberately violates the basic principles of distinction. (Additional Protocol I, arts. 48, 51(2), 52(1).) Any doubt about this is resolved by the fact that Hamas itself has boasted of its intention to hit population centres. It is well accepted in customary international law that �[i]ntentionally directing attacks against the civilian population as such or against individual civilians not taking part in hostilities constitutes a war crime. (Rome Statute, art. 8(2)(b)(i))

2. Staging of Attacks From Residential Areas and Protected Sites: The Law of Armed Conflict not only prohibits targeting an enemy's civilians; it also requires parties to an armed conflict to distinguish their combatant forces from their own civilians, and not to base operations in or near civilian structures, especially protected sites such as schools, medical facilities and places of worship. As the customary law principle is reflected in Article 51(7) of Additional Protocol I: '�The presence or movements of the civilian population or individual civilians shall not be used to render certain points or areas immune from military operations, in particular attempts to shield military objectives from attacks or shield, favour or impede military operations."

3. Use of Civilian Homes and Public Institutions as Bases of Operation - see (2) for citations.

4. Misuse of Medical Facilities and Ambulances - Any time Hamas uses an ambulance to transport its fighters it is violating the Law of Armed Conflict: Under Article 23(f) of the 1907 Regulations annexed to the Hague Convention IV Respecting the Laws and Customs of War on Land, which reflects customary international law, it is �especially forbidden…[t]o make improper use of a flag of truce, … as well as the distinctive badges of the Geneva Convention.. Article 44 of the First Geneva Convention for the Amelioration of the Condition of the Wounded and Sick in Armed Forces in the Field (1949) also provides that: �… the emblem of the Red Cross on a white ground …may not be employed, either in time of peace or in time of war, except to indicate or to protect the medical units and establishments…‖

6. Blending in with Civilians and Use of Human Shields - As the ICRC rule states, "It can be concluded that the use of human shields requires an intentional co-location of military objectives and civilians or persons hors de combat with the specific intent of trying to prevent the targeting of those military objectives."

7. Exploitation of Children - Hamas has paramilitary summer camps for kids. There are reports, from this war and previous ones, of children fighting and being used for tunnel digging. violates the Law of Armed Conflict, including prohibitions against allowing children to take part in hostilities. As customary international law is reflected in this regard in Additional Protocol I, the parties to a conflict must take "all feasible measures" to ensure that children "do not take a direct part in hostilities and, in particular, they shall refrain from recruiting them into their armed forces." (Additional Protocol I, art. 77(2))

8. Interference with Humanitarian Relief Efforts - While Israel kept its end of humanitarian truces. Hamas used them to shoot rockets into Israel, including the Kerem Shalom crossing where humanitarian goods are brought into Gaza. All of these actions violate the Law of Armed Conflict, which requires parties to allow the entry of humanitarian supplies and to guarantee their safety. Article 59 of the Fourth Geneva Convention requires parties in an armed conflict to "permit the free passage of [humanitarian] consignments and shall guarantee their protection." Article 60 of the same Convention protects the shipments from being diverted from their intended purpose, something Hamas has certainly done in the past and is reported to have done in this conflict as well.

9. Hostage-taking - The Fourth Geneva Conventions, article 34, says flatly "The taking of hostages is prohibited." This is not an "arrest" as Israel-haters claim, and this is not a prisoner of war situation as Hamas has made clear - the purpose of Hamas' hostage-taking falls under the definition on the International Convention Against the Taking of Hostages: "Any person who seizes or detains and threatens to kill, to injure or to continue to detain another person (hereinafter referred to as the "hostage")in order to compel a third party, namely, a State, an international intergovernmental organization, a natural or juridical person, or a group of persons, to do or abstain from doing any act as an explicit or implicit condition for the release of the hostage commits the offence of taking of hostages ("hostage-taking") within the meaning of this Convention."

10. Using the uniform of the enemy  - Additional Protocol I prohibits the use of enemy flags, military emblems, insignia or uniforms "while engaging in attacks or in order to shield, favour, protect or impede military operations".[3] Under the Statute of the International Criminal Court, "making improper use … of the flag or of the military insignia and uniform of the enemy" constitutes a war crime in international armed conflicts when it results in death or serious personal injury.[4] According to some, this is considered perfidy, a war crime. (h/t Joshua)

12. Targeting civilian objects, such as airports or nuclear power plants - Rule 7 of the Customary IHL says "Attacks must not be directed against civilian objects," quoting Articles 48 and 52(2) of Additional Protocol I.

See also Rule 71, "The use of weapons which are by nature indiscriminate is prohibited."

14. Proportionality in attack - ICRC's Rule 14 states "Launching an attack which may be expected to cause incidental loss of civilian life, injury to civilians, damage to civilian objects, or a combination thereof, which would be excessive in relation to the concrete and direct military advantageanticipated, is prohibited." Rocket attacks against civilians have zero military advantage, so by definition they are disproportionate to their military advantage.

See also Rule 18: "Each party to the conflict must do everything feasible to assess whether the attack may be expected to cause incidental loss of civilian life, injury to civilians, damage to civilian objects, or a combination thereof, which would be excessive in relation to the concrete and direct military advantage anticipated."

15. Advance Warning - Rule 20 of the ICRC CIHL states "Each party to the conflict must give effective advance warning of attacks which may affect the civilian population, unless circumstances do not permit." Given that Hamas has used the media and SMS calls to threaten Israelis, it is clear that they have the ability to warn before every rocket attack. Their failure to do so is a violation of IHL.

16. Protecting civilians - Rule 22 of the ICRC Customary IHL states "The parties to the conflict must take all feasible precautions to protect the civilian population and civilian objects under their control against the effects of attacks." Hamas not only has failed to protect civilians in Gaza by building bomb shelters, they have deliberately put civilians in harm's way.

17. Attacking medical units - Rule 28 states "Medical units exclusively assigned to medical purposes must be respected and protected in all circumstances." Hamas has shot mortars at the Israeli field hospital, set up for Gazans, near the Erez crossing.

18. Protection of Journalists - Hamas has threatened journalists, implicitly and explicitly, accusing some of being spies and sometimes not allowing them to leave Gaza, making them effectively hostages. Rule 34 states "Civilian journalists engaged in professional missions in areas of armed conflict must be respected and protected as long as they are not taking a direct part in hostilities."

19. Mistreating the dead. Rule 113 says "Each party to the conflict must take all possible measures to prevent the dead from being despoiled. Mutilation of dead bodies is prohibited." Hamas has shown off an alleged chip cut out from the (presumably) dead body of Shaul Oron.

There are also numerous conventions that Hamas violates, but I am not sure if they reach the level of international law since they are not signatories. Customary IHL, however, applies to all. .

There are also at least three violations of international law in the way Gilad Shalit was treated, but I am limiting this only to the current war.