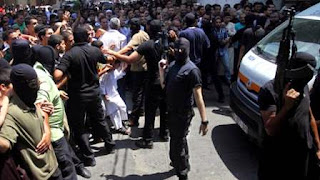 Armed Palestinian masked men push back a crowd of worshippers outside a mosque in Gaza City after Friday prayers on August 22, 2014, before executing 18 men for allegedly collaborating with Israel. Six of them were grabbed from among hundreds of worshippers leaving the city's largest mosque, by men in the uniform of Hamas's military wing, witnesses told AFP. (Photo credit: AFP)

Masked Hamas gunmen on Friday afternoon killed seven suspected informants for Israel near a Gaza City mosque as worshipers were ending midday prayers, bringing the total number of alleged collaborators killed in the coastal strip during the day to 18, according to witnesses and Hamas media.

One witness said masked gunmen lined up the seven men in a side street and opened fire on them. He spoke on condition of anonymity, fearing for his own safety.

Other witnesses told AFP that six of the victims were grabbed from among hundreds of worshipers leaving the city’s largest mosque, by men in the uniform of Hamas’s military wing. They were pushed to the ground. One of the masked men shouted: “This is the final moment of the Zionist enemy collaborators,” then the gunmen sprayed them with bullets.

On Friday morning, a Gaza security official said that 11 suspected informers were killed at the Gaza City police headquarters, noting that they had previously been sentenced by Gaza courts.

The killings of the first 11 were also reported by al-Rai and al-Majd, two websites linked to Hamas.

Israel’s intelligence services rely, in part, on informers to pinpoint the whereabouts of Hamas leaders.

The executions came on the heels of Thursday’s assassinations of two of Hamas’s most senior terror commanders and another senior member in an Israeli strike. Israel also attempted to assassinate Hamas military chief Muhammad Deif on Tuesday, and his fate is still unknown: Israeli officials have asserted he’s likely dead, but Hamas claims that he survived.

The report said that the three men were tried under “revolutionary procedures.” The website also declared a “zero-tolerance” policy toward those who collaborate with Israel.

Last month, at the height of the Israel Defense Forces’ Operation Protective Edge in the Gaza Strip, a Palestinian media source reported that Hamas had killed over 30 suspected collaborators.

Unnamed Palestinian security sources in Gaza told Palestine Press News Agency at the time that Hamas had apprehend dozens of suspected spies in the northern neighborhood of Shejaiya — which saw heavy fighting with the IDF during July — and summarily executed them following a short investigation. The sources said that many of the suspects were caught with weapons, telephones, and SIM cards from the Israeli cell provider Orange.

According to Ma’an, another man suspected of working with Israel was shot dead in the middle of the day on a Rafah street, in southern Gaza, on July 13.

Hamas has undertaken numerous anti-collaboration campaigns in the Gaza Strip over the past years, offering amnesty to repentant Israeli spies. In May, the Hamas government executed two condemned collaborators for divulging information that was used by Israel to kill two Palestinians.

AP and AFP contributed to this report.