Some 705 journalists from 42 countries came to Israel specifically to cover the Gaza conflict, according to Israel’s Government Press Office.

The correspondents for the Israeli military’s Operation Protective Edge joined approximately 750 journalists who are stationed in Israel on a regular basis.

In contrast, some 303 foreign journalists arrived in Israel during Operation Pillar of Defense in November 2012.

Following the ceasefire that went into effect Tuesday morning, the press office said it gathered testimony from foreign journalists regarding harassment by Hamas activists while trying to carry out their assignments.

“Journalists said that during their coverage of the fighting they received threats and – in several cases – were the victims of violence that included destruction of their equipment because they had documented criminal activity by Hamas such as the launching of rockets from the heart of civilian areas,” the press office statement said.

Two thirds of the visiting media teams don’t report from the Israeli side but make their way to Gaza via the Erez crossing.

being launched, or seeing the damage from one falling short, or even any Hamas member, until the ceasefire.

Their reporting, by and large, was only parroting Hamas talking points.

Hundreds of corespondents either too lazy to report on both sides of the story or too scared to stand up to Hamas threats - and to tell their audiences about them. Behind these reporters were scores of news agencies who refused, until the very end, to even acknowledge that there were rockets being fired from civilian areas. They still deny that anyone was threatened, even after so many articles and tweets were removed after obvious threats.

Only now, under pressure from bloggers and tweeters and Israeli government officials, are so-called "journalists" starting to reluctantly mention what they were silent about for so long. No mea culpas, of course - they are now pretending to have the courage that they didn't show when it mattered, when public opinion was being formed.

Today's Washington Post has one such belated story of Hamas media manipulation, although more of the 2006 Hezbollah variety than then naked threats that reporters still don't want to admit: 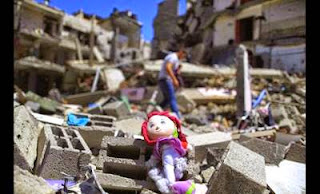 The scene was too neat.

I had just arrived outside the shattered remains of a large mosque in central Gaza City last week. It had been pulverized by an Israeli airstrike. There was rubble, glass and metal everywhere. But on a patch of ground in front of the structure, visible for everyone to see, was a small, dusty carpet.

On top lay piles of burned, ripped copies of the Koran, Islam’s holy book. The symbolism was obvious, almost too perfect. It was clear that someone had placed them there to attract sympathy for the Palestinian cause. A television crew spotted the pile and filmed it. Mission accomplished.

...Take the attack in the Beach Camp neighborhood of Gaza City last week. Hamas militants blamed an Israeli strike; Israel declared that Hamas accidentally fired a mortar into the neighborhood. Children had died.

In the middle of the road, where the kids were killed, was a small pool of blood. At first glance, it evoked a sense of sadness and outrage. As I looked closer, I noticed a child’s slipper in the middle of the blood. The slipper was intact. There were no bloodstains. And next to the slipper, a black plastic toy gun.

Again I noticed a television cameraman drawn to this powerful image. I moved on.

Earlier that day in Shifa Hospital in Gaza City, as the dead and wounded were being rushed into the building, I saw a girl, no older than 7, dressed in a yellow and blue dress, speaking in front of a television camera.

“Bring back my brother and father,” she cried, visibly upset.

Her mother, seated next to her, whispered into her ear and nudged her.

“They were kids,” the girl continued, following her mother’s coaching. “They were just playing. What is their crime, for Israel to target them? They are just kids.”

That last vignette points to other shortcomings of the media: they would prefer to film the obviously coached girl than to report the coaching.

Moreover, that story shows that Gazans - and Palestinian Arabs in general - are brought up to playact to Westerners. I can't count the number of times I have reported "eyewitnesses" to Israeli airstrikes that never happened. The ghoulish manipulation of a dead girl for the cameras on Sunday probably wasn't done by Hamas, but by ordinary Gazans conditioned to play for the cameras.

There were very few real journalists among the 450 in Gaza this past month.