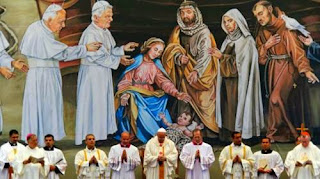 The speech given by the Latin Patriarch to the Pope was filled with what can only be considered age-old
Catholic antisemitic imagery.

Holy Father, thank you for the beautiful celebration of the Eucharist here ,where we are so close to the Grotto of the Nativity.

I see a total harmony between your person, your way of leading, your way of addressing the world and the message of Bethlehem. Bethlehem: simplicity, openness, communion, the Divine who becomes incarnate, humbles himself and takes on our human form to be able to love us more.

Yes, a city where, if the Palestinian Arabs would have their way, Jews would be barred - including Rachel's Tomb, which the Patriarch's friends have been trying to usurp from the Jews. How open of them!

It is our wish that your visit will revive in human hearts, the Christmas message, the peace and the warmth of the grotto of Bethlehem.

We fervently hope that your pilgrimage may help each person to experience the greatness of the humility of Bethlehem, to recognise the futility of arrogance and the beauty of childhood and innocence.

"Arrogance" is a codeword among Middle Easterners for Western powers. Iran uses the term most often but it is used by Arabs sometimes as well.

So many children today have been reduced by the great of this world to a life of misery. They are often abandoned, homeless, without parents, and are forced to run around the dusty streets of refugee camps, as they have neither roof nor home to protect them.

Many are young people and children, friends of the child Jesus, who hear the same words spoken to Mary and Joseph “there is no room in the inn”. There is no place for them, neither in the family policy that decides their fate.

Why again are there "refugee camps" in areas under Arab control, including Palestinian Arab control?  Why haven't they been replaced with permanent housing? Why have they been treated like dirt for 66 years by their Arab brothers? Why can they not become citizens of their host countries? Why are they considered "refugees" when they live in "Palestine"?

Because the "refugees" are cannon fodder. They are more useful to the cause when they are miserable than when they are happy. The Latin Patriarch has never said a word demanding that they be treated like other Arabs, that they be treated with respect by other Arabs. No, it is easier to keep them homeless to help make the specious comparison between then and baby Jesus and Mary and Joseph, homeless and suffering.

It is worth reminding the world that Israel has tried to build decent homes for the "refugees" and was rewarded with UN resolutions condemning them. The reason for homelessness for 66 years has nothing to do with Israel.

There is no place for children in legislations. Neither do they take part in negotiations for a peace that never finds its way to reach us, a peace that fails to break through the walls of fear and distrust that surround this city. In the footsteps of the Divine Child, our young people have experienced migration, hunger, cold, and also often, the demolition of their homes.

Walls of fear and mistrust? Is the Catholic leader now blaming Jews for not happily embracing being blown to bits by terrorists?

The wall does not "surround" Bethlehem. Not even close.

And once again, he compares Palestinian Arab children to Jesus, and Jews to his oppressors.

Together with you Most Holy Father, today we beg the child Jesus, to expand His grotto to welcome and accommodate the many children who are victims of violence and injustice. How can we forget to pray for the many prisoners in overcrowded prisons…

Prisoners who presumably can be forgiven for their terrorism and murder but those Jews who do not accept Jesus are damned.

They hunger for a piece of bread, yearn for justice and peace, destitute for a welcoming home. We are not yet done with the present-day Herods, who fear peace more than war, who dread the prosperity of families and who are prepared to continue killing.

There you have it. Today's Jews are the Herods while Palestinian Arab children are Jesus.

Most Holy Father, your arrival here was preceded by your reputation as a man of God, as a true leader who knows how to govern, and a true brother for all of us. We, the descendants of the first shepherds, in response to the invitation of the angels, we are with you in Bethlehem to adore the Child and to pay tribute to His parents.

And if the Palestinians are "descendants of the first shepherds" then the Jews are usurpers and thieves.

He is so loving!

Unfortunately, Pope Francis, whether by design or not, echoed one of the Patriarch's points:

And we have to ask ourselves: Who are we, as we stand before the Child Jesus? Who are we, standing as we stand before today’s children? Are we like Mary and Joseph, who welcomed Jesus and care for him with the love of a father and a mother? Or are we like Herod, who wanted to eliminate him? Are we like the shepherds, who went in haste to kneel before him in worship and offer him their humble gifts? Or are we indifferent?

Since the Jews have already been compared to Herod and Palestinians to Jesus, Francis' questions sound a bit too rhetorical.

UPDATE: One of the videos welcoming the Pope says that Jesus was the first Palestinian refugee. (Turn on subtitles.)